Agents asked to confess if their firm has been price-fixing

A new call has been issued this morning by the Competition and Markets Authority for...

Underpaid agents told: ‘You can earn £200k a year in a hybrid firm’

An estate agent who has himself made the move from the High Street to a...

An estate agent has sold a home off-market by posting teaser photographs on Instagram.  The buyer...

Countrywide faces crunch deadline for decision on its future

It’s been revealed that under takeover rules, LSL Property Services and Countrywide have until March...

Two agencies are looking to the future with optimism, and striking new deals for their... 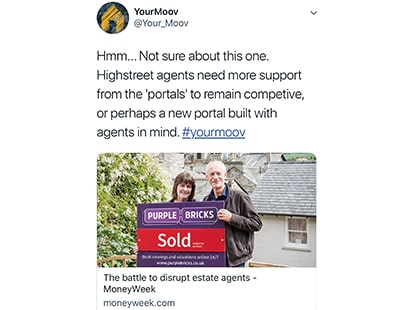 A new portal called YourMoov and describing itself as “the UK’s first decentralised property listing database” is to launch shortly.

In an exclusive interview with Estate Agent Today, a portal spokesman - who has asked at this stage not to be identified - says: “Our mission is to create the UKs first decentralized property listing database. Agents will be able to upload ‘their’ properties, complete rental transactions via ‘smart contracts’, store rental inventories etc… and eventually transfer the title and legal ownership of property.”

The portal will use the digital ledger system Blockchain to create a unique file for each listed property - the spokesman says this will offer prospective buyers access to each property’s history much like looking at a car’s service history prior to purchase.

The team behind the portal consists of property industry and financial experts as well as software developers, who say they are keeping a low profile “until we launch in the not too distant future.” The portal started tweeting over the Christmas holiday period, breaking cover for the first time.

The spokesman says YourMoov will be quite unlike the existing big beasts of the portal world - Rightmove and Zoopla - or challengers like OnTheMarket, which he says now merely replicate each other.

“They pull the agents’ data and put it in one place - that's it. They offer stats and valuation tools but essentially they are the same. We are going to be different, with the addition of of our property files (which will stay with the property for ever) buyers will have much more information at their fingertips.”

He says that YourMoov will appear conventional enough from the user’s perspective, being as easy to use as any existing portal, but will have “value and information [that] will separate us from the established portals.”

The spokesman says agents, as well as solicitors, surveyors and other industry professionals, will be key to the success of YourMoov because they will have the data that must be added to make the portal information-rich. HM Land Registry - which is currently trialling Blockchain technology in some of its digitisation programme - would also be added to the YourMoov files, he says.

“We hope that agents/solicitors/surveyors and of course buyers and sellers will will see the added value of having a portal that offers more than just a ‘listing’. Once the viewing has taken place and offers accepted the buyer can go to their chosen solicitor with ‘our’ information pack and have the transaction complete quickly” says the spokesman.

“We will be asking for a very small fee from agents for us to facilitate this. Ultimately the participating agents will be in charge of their listings both sales and rentals.”

At the moment the creators of the portal are not revealing their marketing strategies and say they are exploring “new advertising platforms to get our message out there.”

He concludes: “We are a small startup with big aspirations. However the beauty of a decentralised blockchain is that we don't need banks of servers, thousands of staff or huge office buildings. Any funding raised at this stage will be put back in to developing the platform and advertising. YourMoov is always on the lookout for investors to work alongside with the common goal of changing the way we buy and sell properties.”

No date has been given to EAT for the launch but you can see the website’s holding page here.

Poll: Is there room for yet another property portal?

Setback for new portal which must change name ahead of launch ...

A new portal which had branded itself as “the UK’s first...

PropTech Today: now is the time to understand blockchain ...

When Professor Andrew Baum’s PropTech 3.0 report was first published, a...