Hello and welcome to this week’s Agents Do Charity - another chance to hear about the remarkable fund-raising done by our industry.

We have some big figures, in every sense of the word, in this week’s roll call. Whether you’re raising £1m or £1, let us know: an email to press@estateagenttoday.co.uk will be enough.

Fine & Country Foundation/Roundabout: How’s this for crazy? A trio of Fine & Country estate agents drove a Reliant Robin from Sheffield to Monte Carlo to raise money for youth homelessness charity, Roundabout, in the Bangers and Cash road trip fundraiser.

But the heroes hit a few bumps in the road.

The car took three attempts to pass its MOT so the team, aptly named The Unreliants, were not the most confident about their vehicle, officially classed as a motorcycle. 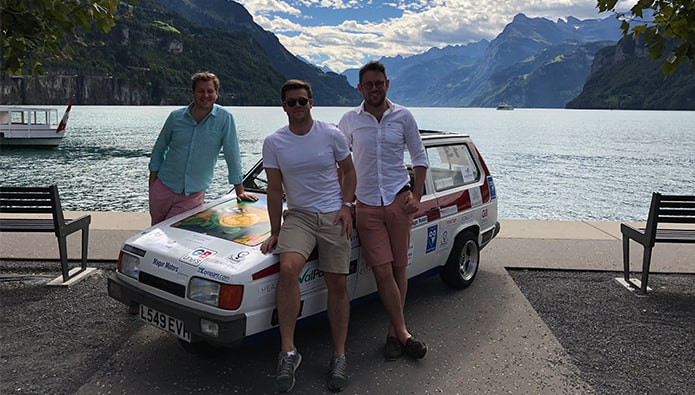 Theirs became the first vehicle in the 21-car event to breakdown: the handbrake snapped just 37 miles into the 1,219 mile road trip. Then on day three, while on their way to the St Gotthards Pass, the engine dropped out and oil poured out.

In true ‘Bangers and Cash’ style, the team called the engineers and tied the engine back into place using cable ties. The unorthodox approach worked a dream, until 30km from the Monte Carlo finish line when they inevitably broke down again. After nursing the car with another bottle of water, the team eventually crossed the finish line and were greeted with cheering fans and their fellow Bangers and Cash teammates who arrived hours earlier.

“It was an incredible challenge and a fantastic way to raise money and awareness for homelessness. I am so proud to be part of such an amazing cause to support The Fine & Country Foundation and our partner charity, Roundabout. We couldn’t have done it without our company sponsors, whose logos were plastered onto the car” says David.

The whole challenge has raised more than £50,000 for Roundabout, and rising.

The Fine & Country Foundation embarks on a variety of fundraising events for homeless charities and causes; from fashion shows to treks up Mount Kilimanjaro. For more information on their work and the charities it supports, visit www.fineandcountryfoundation.com.

Andrews Property Group is owned by these two charitable trusts which together benefit from the profit the business generates. Since 1985, the business has paid out over £10m.

Importantly, in an age where estate agents are amongst the least trusted professionals and the property market comes under continued scrutiny, group chief executive David Westgate believes Andrews’ investment in good causes allows it to stand out as a business doing things differently. 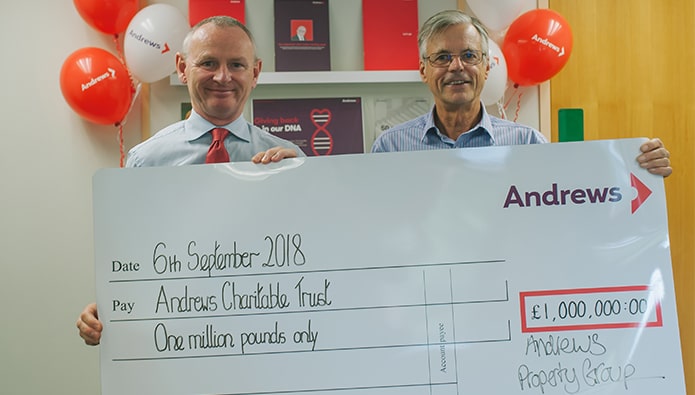 “From day one, Andrews has ensured that the communities that we’re part of benefit from what we do.  But we need to remain visionary and ensure that our work continues to be relevant and make a difference” he says.

Some 85 per cent of the dividend payment will be received by Andrews Charitable Trust which focuses its work on supporting ventures that tackle the link between poverty and housing.  A major focus for ACT is called [establish] and is an innovative housing scheme that was launched as part of Andrews’ 70th anniversary celebrations in 2016.  It aims to purchase 50 homes, in areas where Andrews has a presence, over the coming 50 years as a means of supporting young people leaving the care system.

Two [establish] houses have already been launched.  The first was in Bristol near to the Andrews’ head office, whilst a second was launched in Croydon, South London. It is anticipated that a further two homes will be announced before the end of this year.

Prostate Cancer Charity: Buckinghamshire agent Phil Norgan, of Martin Kemps agency, is this November growing a moustache (he says it will irritate him enormously) but it’s all in a great cause - to fight prostate cancer.

Phil’s father-in-law had it and his wife’s uncle is now going through treatment for it, so it’s a personal mission of his to fight the disease.

In addition, his agents have signed up to Walking For Heroes in December in aid of Help4Heroes.

“We shall either walk to work, or home from work at least once” says Phil - different members of his team will be walking from two to 15 milesa. Best foot forward!

Finally, they’ll be supporting Children In Need in November too - a fantastic effort from the agency.

Centrepoint: This November Steven Herd from My London Home is taking part in Centrepoint’s Sleep Out to break the cycle of youth homelessness.

“Sleeping out on a bitterly cold and damp November night won’t be an easy task but it will help to give some of society’s most vulnerable people the support they need to rebuild their lives.

In order to support homeless young people I need you to donate” explains Steven.

You can help out here.

You don’t need EAT to remind you that Christmas is now...