A leading property industry analysts says Rightmove may be amongst the top portals in the industry worldwide, but it is facing a challenging future because it has not diversified.

Mike DelPrete - former head of strategy at the property portal Trade Me in New Zealand and now a respected international real estate consultant - says that despite Rightmove’s dominance in the UK and hugely impressive profitability, “it has not diversified its products or revenue streams beyond the core listing advertising business.”

He adds: “This strategy has served the business well for the past decade, but the business faces a coming dilemma. Does Rightmove need to change its strategy?”

DelPrete makes his comments in a new report, The Future of Real Estate Portals, which has been released this week; he is making a ‘special offer’ to Estate Agent Today readers to buy a copy at a discounted price (details below).

And interestingly the analysis comes as Rightmove is beginning to be a target for OnTheMarket - another portal concentrating on listings rather than diversification.

The analysis DelPrete puts forward is done through a number of slides, using information taken from annual reports, presentations and other industry analyses - we’ve reproduced two of the slides in this story.

He starts by pointing out that while Rightmove’s agency inventory has continued growing, the proportion of its revenue achieved directly from agents has for some five years at least stayed roughly static at a little under 80 per cent. 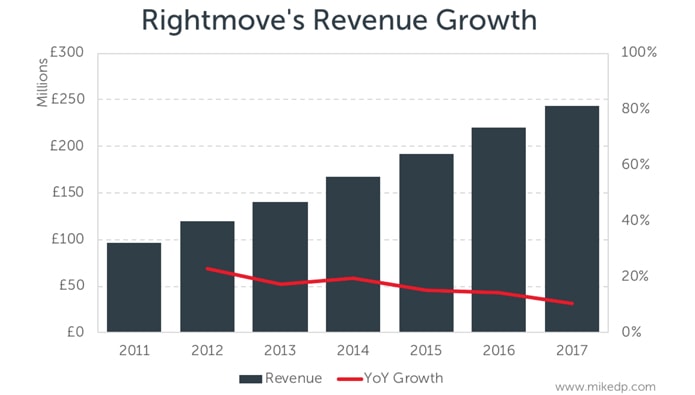 Rightmove succeeds currently because it monopolises the portal market in the UK: it says 73 per cent of time spent on the top four portals overall is spent on Rightmove.

However, DelPrete says that there is no apparent attempt to widen the potential revenue, with all efforts instead focussed on additional premium products - effectively extracting more money from the primary revenue source (that is, agents).

Average Revenue Per Advertiser (a key measure for portals’ financial success) is growing, albeit generally more slowly over time, but new revenue sources are not appearing. DelPrete warns that this may well constitute something approaching market saturation (a phenomenon, he points out, that some portals in other countries are finding, too, as the portal sector matures).

Revealing figures from Rightmove’s own reports, he says that year-on-year expense growth - an indicator of investment - dropped to 9.0 per cent last year, significantly less than at any time in the previous three years at least, prompting DelPrete to ask: “Is Rightmove properly investing for the future while it tightens its belt?”

And he identifies that belt-tightening by showing employee headcount figures, growing rapidly each year since 2011 to over 450 by the end of 2016; but then in 2017 the growth was much more modest, just 10 new staff. 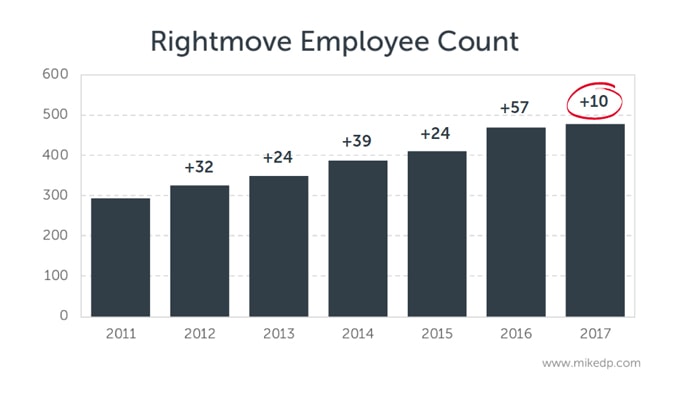 On top of that, he speaks of increasingly expensive product development - “the higher the effort, the lower the margin” is how he describes it - with ever-more investment and effort required to produce revenue.

DelPrete concludes his analysis of Rightmove by raising a spectre haunting many portal operators worldwide: Facebook’s entry into property listings.

He says this by no means spells the end of Rightmove, which he insists is “an incredibly strong business”, but he insists the UK’s largest portal is facing a dilemma as to where to go next.

As ever with DelPrete’s work, this is a fascinating read and his whole document - looking at portals worldwide, including ZPG in the UK as well as Rightmove - is available to Estate Agent Today readers at a 15 per cent discount by quoting the code EAT2018.

More details about how to get the report can be found here.

Poll: Should Rightmove diversify or stick to listings?