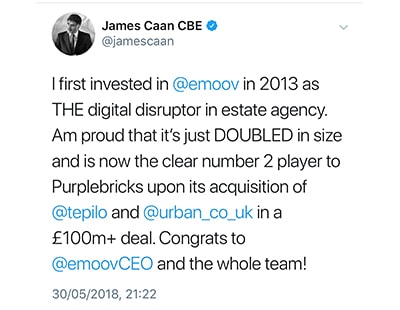 The so-called ‘merger’ of Emoov, Tepilo and a lettings firm is actually an acquisition by Emoov of the other two companies.

That's the claim from former TV Dragon’s Den star James Caan, who was one of the early investors in Emoov.

The official statement about the combining of the three companies, released by Emoov yesterday, was described by some trade and mainstream media as a merger, following the wording in a press release.

However Caan - an early investor in Emoov, who in 2014 described in a blog how beguiled he was by the company, which started life operating from the home of chief executive Russell Quirk - spilled the beans of it being an acquisition in a tweet late last evening.

It read: “I first invested in Emoov in 2013 as THE digital disrupter in estate agency. Am proud that it’s just DOUBLED in size and is now the clear number 2 player to Purplebricks upon its acquisition of Tepilo and Urban in a £100m-plus deal.”

The tweet, and its suggestion that the ‘merger’ was in fact an acquisition, was promptly retweeted by Emoov CEO Russell Quirk.

However, it appears that TV property expert and media star Sarah Beeny - who is the official face of Tepilo despite no longer being a director - is likely to remain by far the best known name associated with the new online agency operation revealed yesterday.

“I founded Tepilo in 2009 with the intention of putting the customer at the centre of their own property transactions. This deal creates a truly powerful partnership of property experts that are focussed upon doing right by the customer and improving the home buying, selling and rental process for all” says Beeny.

“I’m truly delighted with the combination of the Emoov, Tepilo and Urban families to form such a valuable proposition” she adds - her statement did not use the word ‘merger’.

Beeny remains the figurehead for Tepilo today, despite having ceased being a director of it late last year: she remains identified on its website and For Sale signs, and it is understood that the Tepilo branding will remain, for the moment at least.

Tepilo was a private For Sale By Owner site in its early years until it became an online agency in its own right in late 2013, merging at the time with another agency, Think Property.

The new three-agency company announced yesterday will see long-standing online advocate Quirk serve as chief executive with the chief financial officer being Frank McGlade, formerly of Just Eat, and the marketing officer being Lucy Milne, also of Just Eat as well as EE.

The merged entity says it has £15m in ‘new money’ including some from Northern & Shell, Tepilo’s largest shareholder. As we reported some weeks ago, there will also be Channel 4 investment from its Commercial Growth Fund.

Poll: Will Emoov be a success now that it's taken over Tepilo and Urban?

Sarah Beeny – Will she be returning to estate agency after Tepilo? ...

This week’s In Conversation Today interviewee needs no introduction. One of...

Tepilo has told Estate Agent Today that it will be unaffected...