In a day of unexpected drama, Boris Johnson carried out a surprisingly brutal and widespread...

Conveyancing – is industry-wide UPRN adoption on the cards?

Industry-wide adoption of Unique Property Reference Numbers could be one step closer after an announcement...

Being able to show proof of funds in a quick, transparent and simple way is more...

One of the biggest campaign groups calling for leasehold reform has welcomed the action taken...

ESTAS Forum - can agents and conveyancers work better together?

The property market over the last 18 months has seen unprecedented activity - as a... 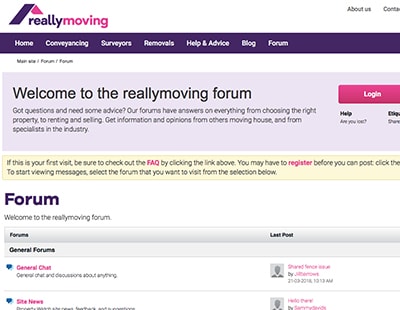 The comparison site Reallymoving, which allows users to get online quotes for conveyancers, surveyors and removal firms, has acquired the property forum Homemove.

A statement says this creates “a space where [reallymoving.com’s] customers can ask questions and share opinions on all elements of buying, selling and renting.”

The forum has attracted over 20,000 posts from over 12,000 existing members, and a new  AIBU or ‘Am I Being Unreasonable?’ thread has been added; the platform says this has been inspired by the parenting website Mumsnet, which has a thread where those moving home can vent their frustrations about the process.

Reallymoving says it will have a panel of professional from the conveyancing, surveying and removals sectors, who are on hand to answer users’ questions - it is also encouraging other property professionals to join the forum and contribute “for free, driving new business leads.”

Reallymoving launched 19 years ago and says it served its two millionth customner at the start of this year; it is an independent and privately financed company, majority owned by its management and directors.

During 2017 it received 280,000 registrations and generated 980,000 quotes; it claims that approximately eight per cent of UK home movers in 2017 received quotes from the site.