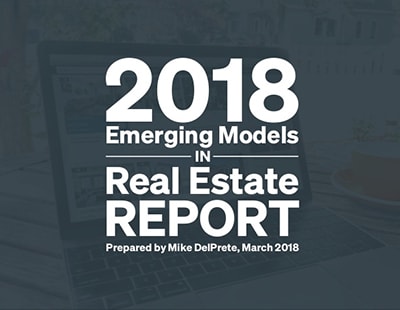 One of the world’s leading property technology analysts has compiled a major report on estate agents’ business models - an exercise which has included a detailed assessment of what lies behind Purplebricks’ explosion on to the UK market.

The 2018 Emerging Models in Real Estate Report is a presentation involving over 190 slides looking at how these new agencies are changing the way consumers buy and sell houses.

It’s been compiled by Mike DelPrete, the former head of strategy at the property portal Trade Me in New Zealand and now a leading international real estate consultant. He shared the report’s findings with Estate Agent Today ahead of their publication online.

DelPrete says he has spent some two years on the study, which looks at companies from around the world including British firms Emoov, Purplebricks, HouseSimple, easyProperty, Doorsteps, Tepilo, Yopa, Nested and Settled, as well as traditional agency Countrywide.

All the companies he analysed were selected because he felt they had “meaningful market traction” with business models likely to support profitable business over the long term, and operating within developed markets.

Using a presumed average commission of 1.4 per cent in the UK, DelPrete calculates that the amount of commission paid to UK agents annually totals some $4.6 billion (roughly £3.33 billion). That contrasts with $4.7 billion in Australia (with an average 2.0 per cent commission), and $62 billion in the US (where commission is typically 5.0 per cent, although the average property price is below that of the UK).

Against that backdrop DelPrete assesses that UK fixed-fee online agencies - which he accepts typically take payment up-front, irrespective of their success on selling a property - have fees which save consumers an average of £2,000. He calls the plethora of online agencies in the UK “the front line of disruption” in the real estate world.

The market leader amongst online operators is easily Purplebricks, which DelPrete says has 16,000-plus listings as of February 2018, compared with a little over 3,000 for Yopa and under 2,000 for most other online operators - and in some cases, well under 2,000. 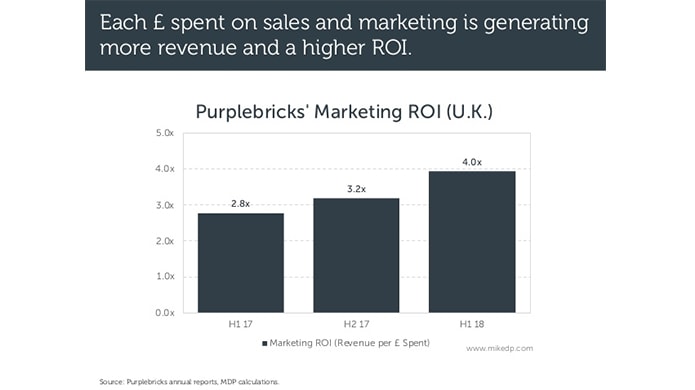 Then, using data from October 2016 to September 2017, DelPrete concludes that the UK online agencies are growing at vastly different rates - with almost all of the significant growth accounted for by Purplebricks, which has had “stunning” expansion, he says.

Looking at Purplebricks itself in more detail, DelPrete says it now accounts for about five per cent of the total UK residential transactions market, with around 60,000 houses listed annually - this makes it not only the largest online operator, but the largest agency of any kind since the collapse of Countrywide’s share.

He gives an interesting insight into Purplebricks’ financial well-being: for example, he says return on investment for the agency in the UK is improving, so that in the first half of 2017 its revenue-per-pound-spent was £2.80, by now - the first half of 2018 - it is reaching £4.

He also claims each of Purplebricks’ Local Property Experts is listing nearly 100 properties per year, a figure that has remained roughly stable even during the period of expansion of LPEs from around 200 in 2016 to 450 by late last year.

DelPrete also says that average revenue and cost per listing are now roughly equal (at about £1,000) whereas over a year ago it cost about £1,400 on average for each listing, which at that time brought in around £900 to the company.

By contrast DelPrete then chronicles the declining fortunes of Countrywide, well-known to Estate Agent Today readers who will have followed its volatile share price, market share and branch closure programme in recent years.

Tellingly, DelPrete’s analysis includes a graph showing Countrywide’s pre-tax profits for the first half of 2016 - some £24.3m - and its comparable figure for H1 2017 - a meagre £447,000. He also says Countrywide’s average fee is dropping. 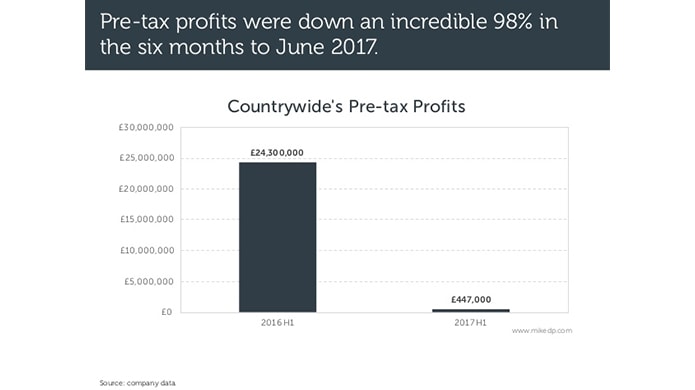 In an interesting exercise later in his presentation, DelPrete also finds common approaches taken by onliners Purplebricks, Tepilo, HouseSimple, Yopa and Emoov, as seen on the customer propositions put on their website home pages.

Most concentrate on getting a free valuation as what DelPrete describes as “the primary call to action” with many emphasising their positive reviews “to build credibility and reflect mass-market appeal.” He summarises this by saying: “The UK online agents are clearly working from the same playbook.”

DelPrete’s full report is a fascinating read with estimates of the proportion of online agencies’ staffing given over to technical teams, and overall employee growth rates for different online operators.

But at the end of it all, traditional agents can take comfort from the conclusions that DelPrete believes sellers will continue to want ‘physical’ agents to hold their hand during a transaction, offering not only expertise but a form of psychological insurance reducing the possibility of a costly error when selling their asset.

You can see his report in full here; even given its length and detail, DelPrete says this merely scratches the surface of how estate agency models and consumer habits are changing.

A PropTech analyst insists that the tumbling share price of Purplebricks...

Purplebricks is a huge success in the UK insists top PropTech analyst ...

A top PropTech analyst says Purplebricks is as much an advertising firm...

One of the world’s leading agency and PropTech analysts says the...

An analysis by a leading PropTech entrepreneur has attempted to throw...