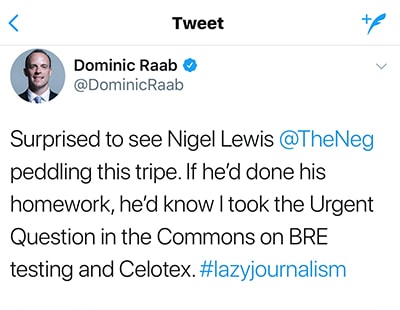 Housing minister Dominic Raab took to Twitter to make a Trump-style criticism of trade magazine The Negotiator and its editor, the respected property journalist Nigel Lewis.

The Neg yesterday ran a story, based on a press release from 10 Downing Street, about the inaugural meeting of the Housing Implementation Taskforce.

This was set up by Prime Minister Theresa May and attended by, among others, the Chancellor, the Housing Secretary, the Transport Secretary and some other Cabinet ministers.

The meeting’s remit, according to Number 10, was “to discuss the progress government is making and further actions needed to increase housing supply.”

Lewis - who edits the news on The Negotiator website and is a long-standing property journalist who formerly edited the Daily Mail property pages - wrote of the meeting: “One oddly conspicuous name left off the list of attendees was Dominic Raab, the Minister of State for Housing, who since being appointed in early January appears to be spending more time fighting Amber Rudd over Brexit than tackling his brief.”

The minister, a well-known Brexiteer, took to Twitter yesterday afternoon to attack the story writing: “Surprised to see Nigel Lewis @TheNeg peddling this tripe. If he’d done his homework he’d know I took the Urgent Question in the Commons on BRE testing and Celotex.”

Raab - a prominent user of social media and tipped for a Cabinet position before the last reshuffle, which saw him moved sideways from being Minister for Courts and Justice to Housing Minister - then added #lazyjournalism to the end of his tweet.

Lewis, however, appears to have had the last word…at least for now. Under The Negotiator’s Twitter icon he responded: “A rather sharp response to a fair point, I’d say Mr Raab.”

Early this morning the minister returned to Twitter to berate another trade publication, Inside Housing, accusing it of “fake news” over its coverage of the Downing Street meeting.

An ex-housing minister and ex-Brexit secretary says he wants to radically...