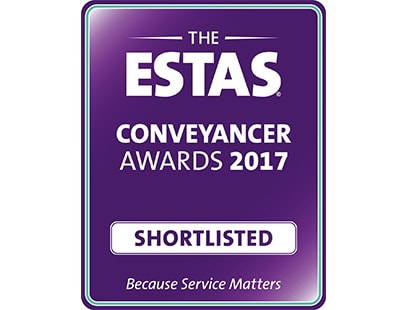 The ESTAS Group has today revealed the shortlist for its inaugural Conveyancer Awards.

Over 5,000 customers have completed a survey about the service they received during the home moving process.

This generated 125,000 pieces of data relating to conveyancers' customer service, from which the shortlist has been formed.

The winners will be announced at the first ever ESTAS Conveyancer Awards taking place in London on October 20.

The awards ceremony, which is sponsored by SearchFlow, will be held at the Grosvenor House Hotel in Mayfair, London.

As with the traditional ESTAS awards, the Conveyancing Awards will be hosted by TV property expert Phil Spencer.

"The ESTAS provides a kite mark for excellent service for any property professional involved in the house moving process," says Spencer, who has been hosting ESTAS ceremonies since 2003.

"Any firm that enters has already sent a clear message that they are passionate about customer service so to make it on to the shortlist is a huge achievement in itself.”

Simon Brown, founder of The ESTAS, says: “We want to highlight conveyancing firms who are providing exceptional levels of customer care through the moving process.”

“We believe the best way to judge the performance of a conveyancer is to ask the clients who have experienced the whole service through to completion.”

“It’s often later in the transaction when a firm really shows their worth and at those times its their experience and professionalism that gets the deal back on track.”

Greg Bryce, managing director of headline sponsor SearchFlow, adds: “We believe these awards will become the benchmark for customer service in the conveyancing sector."

"I’m really looking forward to meeting the winners on stage in October.”

You can see the full shortlist and book tickets for the inaugural ceremony here.

Entries for the new ESTAS Conveyancing Awards are now open and...