Every week we carry reports of how great causes are helped by individual agents and other property professionals - this week is no exception - but we also this time have opportunity to celebrate the great work of the TDS Charitable Foundation.

It was established by the Tenancy Deposit Scheme to raise standards through education in the private rented sector; it’s one of the many unsung activities of our industry, and we are hugely respectful of the great work done in that name. Congratulations.

You can find out more about the foundation below and other great work done by agents - read on!

The TDS Charitable Foundation: This has awarded over £94,000 to organisations to advance education on housing rights and obligations in the private rental sector.

Now in its ninth round of funding in four years, the foundation’s awards were split among ten organisations and charities across England.

To date, it has provided over £400,000 in funding support for organisations across England and Wales and hopes to top the half million-pound mark in its next round of funding.

Professor Martin Partington CBE QC, chairman of The TDS Charitable Foundation, says: “We’re proud to support the 10 initiatives receiving awards. The private rental sector is often difficult to navigate but the projects we’re supporting will go somewhere to make sure that both landlords and tenants across the country know their rights and responsibilities.

“The TDS Charitable Foundation goes right to the heart of the private rented market, with grants aimed directly at benefitting tenants and landlords in communities across England and Wales.

“Applications from similar organisations for our next round of funding will be close on 4 October 2017 and we’d encourage any organisation or charity that educates and informs tenants, landlords or agents to apply.”

Sue Ryder Manorlands Hospice: An estate agent and director at Dacre,Son & Hartley has raised more than £350 in memory of his late father, by completing the Great North Run.

Steven Potts, who heads up the firm’s Bingley office, completed the gruelling 13.1 mile run in just over two hours. All the money he raised is being donated to the Sue Ryder Manorlands Hospice in Oxenhope. The hospice cared for Steven’s father who died in 2012 of Mesothelioma – a Cancer linked to exposure to asbestos.

Steven says: “It’s a charity that’s very close to my heart for obvious reasons. I have completed the Great North Road four times now over the years raising over £3,000 in total for the hospice. Despite the fact my knees hurt these days, it was a really enjoyable day. There was a great atmosphere and I ran with friend who were raising money for the British Heart Foundation.”

Manorlands Hospice provides palliative care and complementary therapy services to support people with life-limiting conditions, which can involve complex physical or psychological problems. The care focuses on helping resolve these problems whilst supporting family, carers and close friends. The hospice offers support to people living in Craven, Airedale, and Wharfedale, as well as central, northern and western areas of Bradford.

Steven adds: “The hospice needs to raise £9,000 every day to stay open, so I have always been keen to help them, especially after my father received such great care. By competing the Great North Run, I am in my own small way supporting the invaluable work that they do in our local community.”

Thangpalkot, Tibet: In October two members from Fine & Country West Midlands, Sean Newman and Clint Nykamp, will be trekking to Everest Base Camp to fund five more houses in Thangpalkot.

The team has been training to prepare for the endurance and altitude ahead of them. After their two-week expedition, Team Thangpalkot will travel to the village to meet the people who are living in temporary accommodation and the new houses. 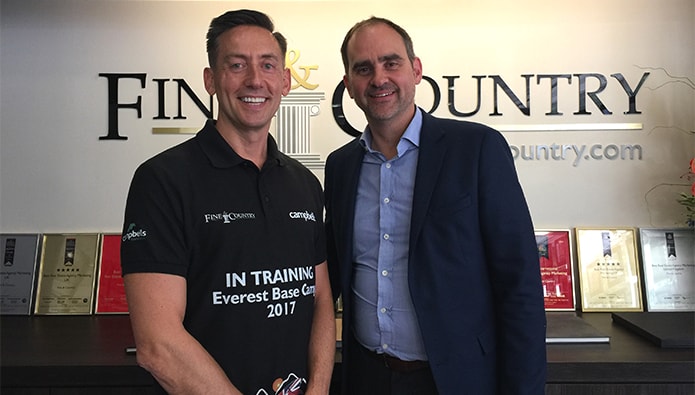 Thangpalkot, along with vast amounts of Nepal was destroyed by devastating earthquakes in 2015. A second earthquake in the same year delivered a huge blow to Thangpalkot, destroying 86 of the 94 houses in the village.

Since 2016, The Fine & Country Foundation has funded 10 houses, with more under construction. However, there are approximately 60 houses which still require urgent funding. Some of the houses, including house number 15, have supported those who do not get any government support. This house went to one man and his five daughters.

Help them support the team at www.justgiving.com/fundraising/Fine-Country-Foundation

Land Director Asa Chittock and Sales Manager Kenny Lattimore, who are both based at the developer's head office in Bardon, had their hair shaved off in front of an audience of colleagues at a staff barbeque.

Between them they have managed to raise an impressive £1,301, which will now be donated to Macmillan and used to support people living with cancer. 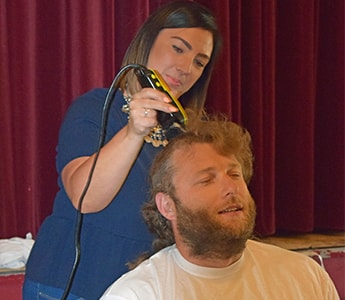 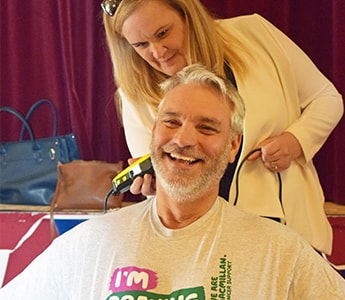 Asa said: “I was delighted to take part in Macmillan's Brave the Shave campaign and it's been great to have such fantastic support from my colleagues at David Wilson Homes. I'd like to thank them for their kind donations.”

Kenny, who lost his mother to cancer two years ago, added: “Macmillan is a hugely worthy cause and I was really pleased to be able to do my bit for charity and get involved with the big shave.”

The Crossgates branch of the area’s leading estate agent kitted out the Under 11’s team at Grimes Dyke Primary School in Whinmoor as part of its ongoing Community Support Programme.

Over the last 12 months Manning Stainton has donated in excess of £50,000 to over 50 worthwhile organisations through its support programme. Other local beneficiaries have included Leeds Foster Care Association and East Leeds FC. 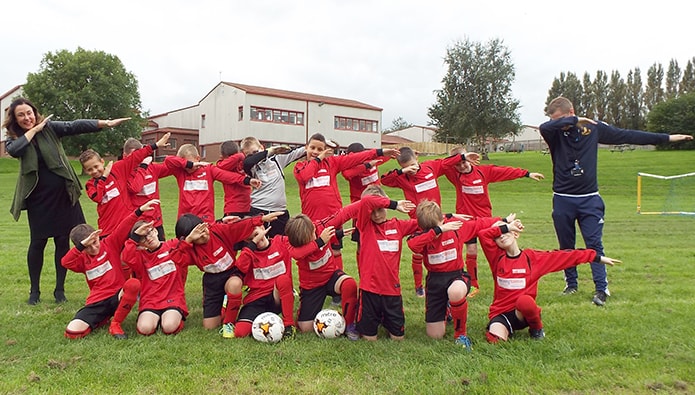 “We have teamed up this year with a couple of other local businesses, Duffield Harrison Solicitors and also St James’s Place Wealth Management and on Friday we will be offering teas and coffees along with some fabulous cakes in return for a donation towards the Macmillan Cancer Support charity” says the agency.

“We will be turning our busy High Street office into a vintage tea room and hope that everyone who is able to attend will have an enjoyable time. We will be serving refreshments from 10am and all are welcome.

“We have invited all the local businesses in Hoddesdon town and have publicised the event heavily on our Facebook page. Our email footers have included an invitation to the event and flyers have been sent out with all correspondence that is posted out, so we hope that we get a good attendance. Our address is: 70 High Street, Hoddesdon, Hertfordshire EN11 8ET.”