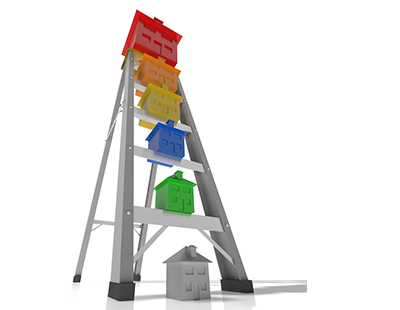 Homeowners ready to take their second step up the property ladder say it's harder than getting on it in the first place according to Lloyds Bank.

Almost a quarter say that they'll have children later in life than they had originally planned with 12 per cent also saying that they will have fewer children. One in eight has claimed they had to change career to help move up in the housing market.

The rise of moving costs, stamp duty and difficulty in finding the right property has meant that 52 per cent of those still living in their first home said that they had planned on moving up the property ladder in the last 12 months but have been unable to do so.

Low savings rates have also been a contributing factor and Second Steppers say that it's taken longer for them to save enough to take the next step. However, there are also challenges on the demand side, as 39 per cent also report that that it's harder to sell their current property now compared to 12 months ago.

When asked in the Lloyds survey what type of property Second Steppers want to purchase, typically they said that they wanted either a period (35 per cent) or new build (34 per cent) property in town with three bedrooms.

The majority realise that their next home won't be their final home with the average amount of time Second Steppers plan to stay in their second property being 10 years.

Only a third said that they don't plan to move again once they've taken the second step.

A survey by Lloyds Bank has revealed that the average ‘first...