Not in vain the distance beacons. Forward, forward let us range,
Let the great world spin forever down the ringing grooves of change.
Through the shadow of the globe we sweep into the younger day;

The most read article in last week’s Sunday Morning PropTech Review was news coming in from America. Property giant Zillow, it is suggested, is making a push to completely replace brokerage agents by fully closing the search-to-transaction loop.

Here in the UK, we have our own Zillow equivalent in Zoopla. So should we be concerned about the future of bricks and mortar agents? Is Zoopla going to make a final push for our jobs?

Companies like Zoopla and Zillow make the bulk of their fortune by selling leads to agents. Because sale leads are more valuable than buying leads, Zillow has now introduced an instant quote service. When a customer is browsing houses for sale, they will be presented with a call to action along the lines of ‘get an instant quote for your house’. They fill in a short form and hit submit. Before long, they are contacted by an agent with an offer, locked in for five days.

However, despite boasting a 75% online audience share, Zillow still only generates 5% of the average agent’s commision.

Whether buying or selling, most people begin their research online but close with the help of an 'offline' agent. This means that Zillow is receiving less than 1% of the $100 billion brokerage industry. It’s easy to see why it's trying to do something about this.

In order to close this loop, Zillow has started to increase the number of services it provides in order to cover those which are traditionally covered by the agent; sales support, marketing, viewing, legal aid etc.

Zillow, already a somewhat disliked brand within the US property industry, has suffered some serious kick-back from agents, many of whom view this as a blatant attempt to cut them out of the transaction altogether. Some very angry tweets make for interesting insight.

There is a note of suggested caution here for the Zillow management team. They are at the start of this change, not the end and there is a huge risk. Over 70% of their revenues currently come from agents. This could seriously upset the applecart - in fact you could suggest they are in a position similar to Rightmove (which we discussed here with Rightmove suffering the innovator's dilemma - worth a read) 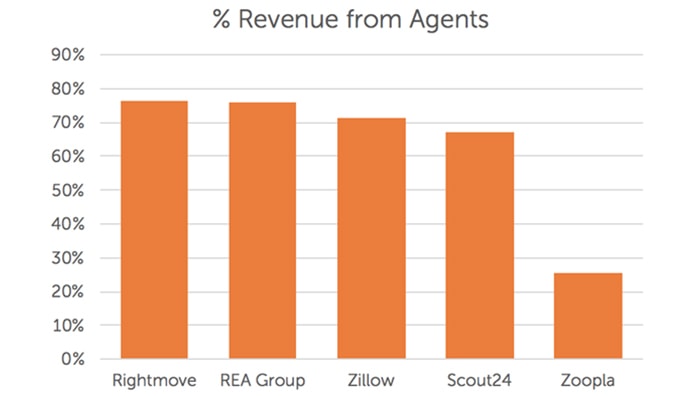 However, as you can see from the graph, Zoopla is in a far far different position of risk about muscling its way into taking over the entire market place.

According to research by Mike Deleprete, just over 20% of its revenues come from agents and to quote his excellent article (good to see it isn’t just me who sees this pattern): “Of all the major real estate websites in the world, Zoopla is best positioned from a revenue diversification standpoint to disrupt the industry.”

From Zillow to Zoopla

Back in the UK, this news leads me to consider our own property giants, Zoopla and Rightmove. They have similarly gargantuan online audiences, and perform almost identical roles as Zillow. Who’s to say that either of them couldn’t completely corner the property lifecycle, from listing and search through to transaction?

Before we move on, it’s worth bearing in mind that there might be a different motive behind Zillow making these moves, one which too could be imitated by Zoopla.

Rather than a bid to eliminate the agent, it might be a simple attempt to eliminate potential competition. In the US, Open Door has been offering instant quotes and solemn guarantees of sale for some time now.

So much so that it is becoming the first port of call for many home sellers looking for a quick deal. It’s entirely possible that Zillow introducing similar services is nothing more than a proverbial 'cock-block', designed to keep Open Door at bay by luring customers away.

In the UK, Nested, which provides a similar guaranteed sale service, may well, if it keeps growing, scare Zoopla into targeting it for some Starbucks inspired elimination.

Is Tech to blame?

Whatever the motive, let’s imagine for a minute that Zoopla or Rightmove do make a big push towards cutting out the middleman, taking the customer all the way from search to transaction, aided by agents working under their brands. Would it really signify the demise of the offline agent? Or is this just one of those moments of panic that regularly pre-empt oncoming waves in the industry?

I think it depends on how confident you are in the fact that you’re doing the work of a truly good residential agent. Because if you are, you don’t need to worry. The truth is, customers are happy to accept instant offers despite being fully aware that they are leaving money on the table. They don’t care, they’re willing to lose out a little financially in order to have a convenient, hassle-free sale.

Those agents who have spent time cultivating and nurturing relationships with customers, building a solid book of personal leads, will experience very few problems. Because they are already proving a hassle-free service to their clients, when it’s time for them to buy or sell a house, they’re going to ring the agent directly. Why? Because they know that they can trust their agent to go the extra mile and make the process a breeze.

Clients who have an agent who is fully invested in their interests have absolutely no need to go online and hand the responsibility to an albeit well-engineered algorithm.  But the agents who have come to rely too much on buying leads from Zoopla may find themselves struggling if the online giant starts providing it’s own brokerage service.

Technology is not going to slow down, it doesn’t matter how many people are annoyed along the way. But I think that too much blame is being placed at tech’s feet. Tech is evolution, tech is inevitable. It is an essential part of our economy’s future. But that doesn’t mean that the need for human agents is disappearing. I do believe, however, that it might act as a quality filter, sifting out those agents who aren’t fulfilling their duties well enough to demonstrate their value to the market.

Change is afoot, and I think being too cynical of it will greatly hinder the potential of the future.

When the railways were first introduced to Victorian England, those who had a vested interest in the country’s canal network, along with those who feared for the desecration of the English countryside, were outraged and made attempts to warn the population of the dystopian days to come. I’ll leave you with rail advocate Thomas Gray’s response to those arguments at the time;

‘...the time is fast approaching when rails must, from their manifest superiority in every respect, supersede the necessity both of canals and turnpike-roads, so far as the general commerce of the country is concerned.’

*James Dearsley is founder of the Digital Marketing Bureau and a PropTech communicator. To sign up to James’ Sunday PropTech Review, click here.