We take a break from the relentless election coverage to look at the great fundraising work being carried out by our industry.

Once again, there have been many great examples of agents doing their bit for charitable causes. Thanks to everyone who has sent in their contributions. If you want to do the same – and we’re always very happy to publicise your work – please get in touch with us on press@estateagenttoday.co.uk.

‘Rumble with the agents’: This annual white collar charity boxing event, in association with Landlord Action and sponsored by Hamilton Fraser, raised £18,000 for Noah’s Ark Children’s Hospice when it took place a few weeks ago.

The sell-out event drew together a room of property professionals – including estate/letting agents, developers and industry suppliers – for a night of action-packed white collar boxing.

Ten participants, with little to no boxing experience, embarked on a strict training regime of supervised coaching to prepare for the night. In addition to six fights, guests were also treated to a sit-down three course meal followed by a charity auction and raffle, hosted by Spurs legend Gary Mabbutt. Signed sporting memorabilia included an Anthony Joshua boxing glove, a 1971 Arsenal shirt and a ticket from the 1966 World Cup final signed by hat-trick hero Sir Geoff Hurst.

‘Rumble with the agents’ will return next year. If you’d like to participate, donate or attend the event, you can visit www.rumblewiththeagents.co.uk for more info.

Together for Short Lives: Estate agents Leaders raised a grand total of £15,000 for its charity partner Together for Short Lives during Children’s Hospice Week. Throughout the UK, staff from all of the 124 Leaders branches participated in a wide range of fundraising activities, including cake sales, coffee mornings, raffles, car washes, cycling challenges, marathons, sponsored walks, games, competitions and a sponsored silence.

What’s more, Leaders invited its landlords to donate a day’s rent to the cause and hundreds obliged. The £15,000 raised in a week at the end of May will contribute to the company’s overall fundraising target for the year of £50,000 (a target it hit in 2016).

“Hundreds of our staff combined imagination and hard work to hold a plethora of fundraising events during Children’s Hospice Week, raising more than £15,000 in the process,” Allison Thompson, managing director at Leaders, commented.

“Having worked with Together for Short Lives since 2015, we know exactly how important this money is and the difference it will make. The charity supports children with life-threatening and life-limiting conditions and we are delighted to be able to help.”

Nick Appleby, Head of Corporate Partnerships at Together for Short Lives, said: “The incredible support shown by Leaders, their staff and customers during Children’s Hospice Week has been truly inspirational!"

“We were really delighted to hear about all the fundraising activities that took place and we want to say a massive thank you to everyone involved,” he added. 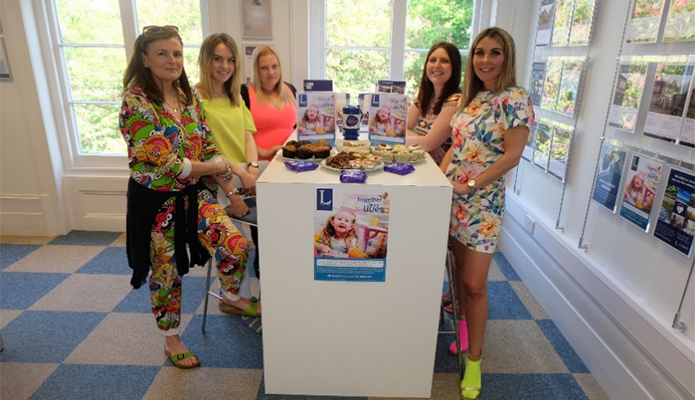 Nine-year old Ciaran Doby, a young Foxes fan who counts Jamie Vardy as his favourite player, took part in the competition which asked people across Leicestershire to design a new Leicester City shirt.

The Harrison Murray panel crowned Ciaran’s entry as the most imaginative and colourful of the many entries received, and he was invited to the Groby branch of Harrison Murray to receive his autographed shirt.

“I really enjoyed coming up with the design and entering the competition, however I had no idea I would win so when my mum told me I was over-the-moon,” Ciaran said. “I’m very proud to have won a signed Leicester City shirt, which will take pride of place in my bedroom.”

His mum, Kirstie, added: “Ciaran finds drawing and colouring an excellent way of expressing himself and is really creative. Thank you so much to everyone at Harrison Murray.”

A royal affair: London Youth, the charity partner of Kinleigh Folkard and Hayward (KFH), celebrated its 130th anniversary with a visit to Buckingham Palace. KFH joined London Youth and the Duke of Edinburgh at the Palace to toast the occasion.

The plush gardens of the Queen’s main London residence were turned into a youth club for the afternoon, with more than 250 in attendance. There were a host of activities on offer for guests, including tennis, rock climbing and catapult-making.

“130 years is an amazing milestone,” Julian Peak, Sales Director at KFH, said. “We share many of London Youth’s values so they made a natural fit as a charity partner, but it’s been fantastic for our network of 60 branches and offices to support specific youth clubs across the capital. So far this year we’ve raised nearly £13,000 for London Youth with a target of £60,000 by the end of December.”

Favourable weather conditions helped to draw a large crowd, who were able to enjoy a choice of more than 20 real ales and ciders and a varied programme of musical entertainment from local groups.

The event, held annually, is there to raise vital funds for the cricket club and its 13 teams (three senior and ten junior). As well as the beer and the music, a raffle was held in aid of the British Heart Foundation.

“The festival is a true community event that requires a lot of hard work from a large number of willing volunteers,” Sarah Joseph, Manager of the Manning Stainton branch in Horsforth, said. “Judging by the attendance their efforts have clearly been rewarded.”

Matthew Pank, Branch Co-ordinator at Manning Stainton’s Guiseley branch, added. “As a company with its roots firmly in the local community we were pleased to be able to lend our support which of course included calling in to sample the delights on offer!”

It’s been a week dominated by an embarrassing U-turn in political...