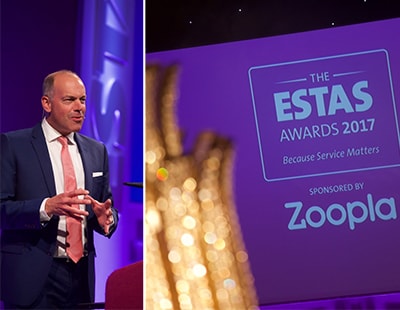 Over 1,000 guests celebrated the success of the industry at the 14th annual ESTAS awards on Friday.

The event, which is sponsored by Zoopla and took place at the Grosvenor House Hotel in Park Lane, saw a host of winners named after the results of over 34,000 customer surveys were revealed.

The ceremony was once again hosted by TV property expert Phil Spencer and, according to the ESTAS, guests consumed almost 5,000 glasses of champagne on a fun-filled afternoon.

"This industry doesn’t get enough credit for the work it does with millions of customers around the UK helping to make their dreams come true and at The ESTAS we want to highlight that fact,” said Spencer when opening the event.

Simon Brown, founder of the awards, told the audience of agents and industry suppliers: "It’s about relationships, real relationships with real customers.”

“We live in a world where the consumer decision making process is influenced more and more by customer reviews so The ESTAS provides a kite mark of excellent service for any property professional involved in the home moving process.”

“We realise not all agencies want to take part, but those that do are making a very public statement about their approach to customer service," added Brown over the weekend.

"I think the secret of the ESTAS' success is that they just encapsulate what a typical independent agent is trying to do which is provide an honest, transparent service for their clients.”

For the second time in three years, board supplier Agency Express picked up the national award for supplier of the year.

Reapit was crowned best in sector for software, IAM Sold was named the best provider of auction services and The ValPal Network - owned by Angels Media, the publisher of Estate Agent Today - was awarded the best in sector trophy for valuation tools.

"We are delighted to have won a prestigious ESTA. It means a lot as it our customers and clients that made the effort to vote,” says Craig Vile, director of The ValPal Network.

Cooper Associates was named best mortgage broker office in the country, and One 77 Mortgages was crowned the country's best national broker.

Entry for the 2018 awards is already open and you can see a full list of this year's winners here.

‘Only fittest will survive’ says agent making eighth acquisition of 2018 ...

Yorkshire agency Linley & Simpson is on the acquisition trail yet...