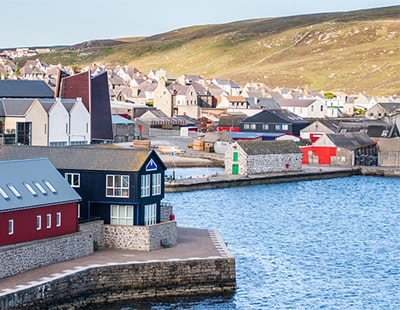 It is perhaps a sign of how difficult it is to read the UK housing market right now that the latest government figures show the location with the highest price rise in 2016 wasn’t London or another big city - but was, instead, the Shetland Isles.

The Scottish islands recorded a rise of 26 per cent in 2016 according to the Office for National Statistics - that’s more than three times the all-UK average of 7.2 per cent, which was the highest national annual rate recorded since last July.

Outside of the Shetland Isles, the region with the largest increase was the East of England where prices rose 11.3 per cent, followed by the South East on 8.5 per cent.

London of course remains the region with the highest average house price at £484,000.

”These numbers bear out what we have seen in other recent surveys - that prices although still modestly rising are very much underpinned by a shortage of stock and a dearth of transaction activity” according to Jeremy Leaf, the north London estate agent and former RICS residential chairman.

“The picture is particularly worrying in London where there has been a sharp fall in sales” he adds.

Nick Leeming, chairman of Jackson-Stops & Staff, says London is continuing to suffer at the top end from high stamp duty. “A double reverse ripple effect can be seen at play with the more expensive inner London boroughs experiencing subdued annual growth in the short term, but with greater annual growth being sustained in the less expensive, outer London boroughs” he says.

Leeming cites Barking and Dagenham as pulling well ahead of more expensive boroughs with 14.1 per cent price growth in 2016.

There are 16,547 businesses registered as estate agencies in the UK...

The annual rate of growth of UK house prices has slowed...