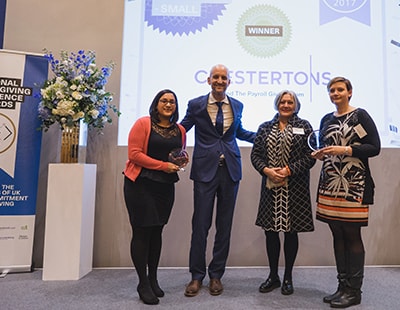 The award is a government-endorsed recognition of an employer’s dedication to tax-free giving.

Payroll Giving – an easy way for employees to donate to charity direct through their pay - has been going for 30 years during which time £2 billion has been donated to good causes.

Chestertons was recently announced as the only estate agency in the country to be awarded a Platinum Payroll Giving Quality Mark for the second consecutive year, and was the only agency shortlisted at the National Payroll Giving Awards.

“We currently have over 20 per cent of staff at Chestertons signed up to the scheme, and are aiming to encourage yet more to start giving to a chosen charity next year.

“We would also urge more businesses to get behind the scheme as it is a really easy initiative to implement and an effective way of raising money for virtually any charity in the country” says Giles Milner, marketing director for Chestertons and chair of its employee-led ‘Charity Champions’ committee.

Chestertons has also recently won the Giving Back to London Award at The London Magazine Club Awards 2017 for its St Mungo’s homeless charity partnership.

Agents Do Charity - this week ranging from mental health to art ...

Welcome to another ADC, the weekly round-up each Friday of agents’...