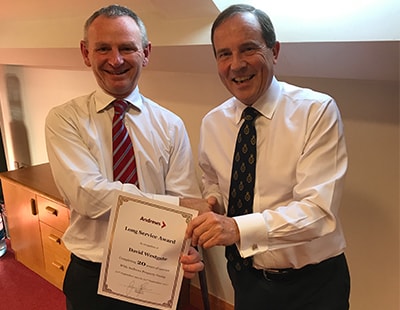 David Westgate, group chief executive at Andrews Property Group, has been presented with a long service award in recognition of his 20 years at the same property firm.

Westgate, a Fellow of the Royal Institute of Chartered Surveyors, previously enjoyed 10 years’ industry experience before joining the company in 1997.

Originally comprised of just five lettings offices and a portfolio of 100 landlords, Andrews Lettings and Management has in the past two decades extended its branch network more than seven-fold and works with 1,000s of landlords each year.

“Property is such an exciting sector to be involved in and its constant evolution, whilst bringing challenges, also brings with it many very exciting opportunities.  I think it speaks volumes about the strength of the Andrews’ team that I’ve chosen to build such an important part of my career here and I’m looking forward to many more exciting years ahead” he says.

In addition to his leadership roles at Andrews Property Group, Westgate has additionally been a trustee of the Andrews Charitable Trust for the past 16 years and has often taken up advisory roles on the charities and projects supported by its grants.

Since February of this year, he has also been on the board of The Property Ombudsman.

New Deputy for TPO as industry gears up for change ...

A new Deputy Ombudsman, Lesley Horton, has been appointed by The...

Agent webinars - your chance to ask Rightmove anything ...

Agents will be able to grill Rightmove’s legal and compliance director...