The already-high fall-through rate for transactions is likely to be supercharged by the impending end...

It’s been a big week for property news - controversies surrounding Purplebricks, merger discussions between big franchise operators, and another government consultation into part of the industry.

Yet still there’s time for fund-raising for good causes: thanks for everything done by everyone in the industry to help those less fortunate than ourselves.

If you would like some publicity, just let us know at press@estateagenttoday.co.uk and you could be mentioned on next Friday’s Agents Do Charity.

Now on with this week’s heroic efforts…

Norwood: Two directors from Life Residential are doing a charity bike ride for five days in India to raise money for Norwood. They have done similar bike rides before, last year raising money for the charity whilst biking in Zambia. 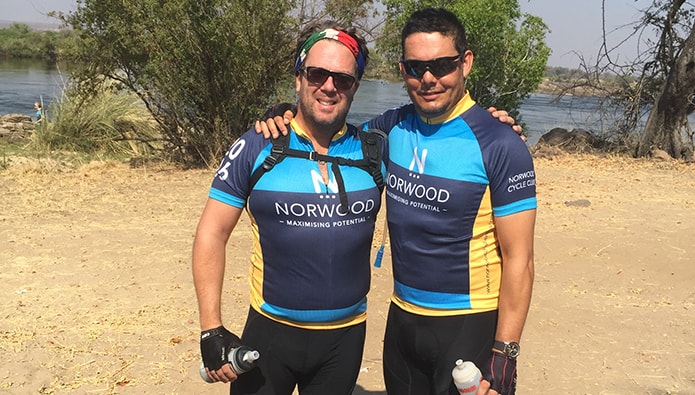 "In previous years we’ve cycled across a desert in Israel and across Africa to reach the Victoria Falls. This year the goal is to tame the tropical mountains of Kerala. So with that in mind Scott and myself have committed to yet another one of the cycling challenges organised to support the Norwood Charity which is a 500 kilometre bike ride in five days across Kerala in India in November” says Nigel Carter, who’s undertaking the challenge with Scott Ayliffe.

“Its going to be hot, sweaty and really bumpy as its mainly off roads. Given the number of vaccinations we’ve had to endure its not a place that you might go out of your way to ride a bike in but heyho…we’re in and we are looking forward to the challenge. We are really hoping that you can help support this worthwhile cause by sponsoring us” he adds.

Margaret Crabb, an administrator at Blueberry Mortgages in Poundbury was touched personally by the life-saving service the Air Ambulance provides, when her son suffered life-threatening head injuries as a result of a serious farming accident which triggered the helicopter flying in and taking him to Bristol Southmead Hospital. 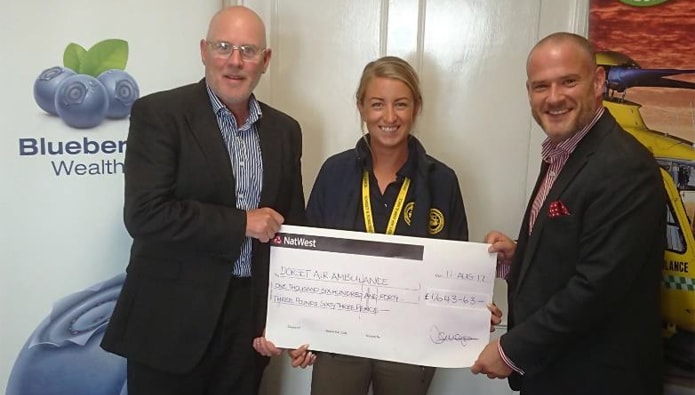 “My son made an excellent recovery, all thanks to the speedy reactions of the Air Ambulance. It could have been a very solemn story without them” They are such a vital service, I did what I could to help them in return for what they did for my son and so many people we know locally” she says.

Margaret has spent the last 12 months fundraising in the company from raffles and donations through to giving her catering services for free.

Launchpad: Property services company, Romans held its first Big Sleep Out to raise funds for Launchpad, a Reading based charity whose mission is to prevent homelessness.

Since the creation of their Community and Culture division in July, Romans have expanded their charitable giving and are now supporting nine local charities, each nominated by their staff.

Romans’ Community and Culture Manager Vanessa Foot explains; “Launchpad’s mission is very close to our hearts and being in the business of property, is an apt cause to get involved in. On October 10, National Homeless Day, 14 Romans staff slept outdoors with nothing more than a shelter they made themselves on the night and a sleeping bag.” 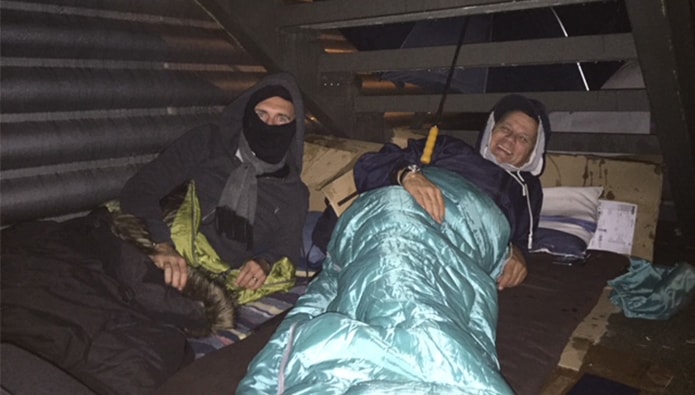 The donations received from staff, friends and family were astronomical and so far the total amount raised is over £5,700.

“The passion and enthusiasm from both those that took part and those who made donations is really heart-warming and everyone from the Board of Directors to the staff working in the local branches have really got behind our cause” explains Jason McMahon, the organiser of the Big Sleep Out. 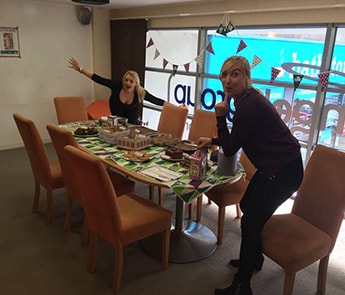 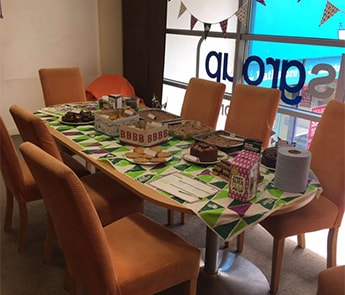 An array of homemade bakes - sausage rolls, brownies and millionaire's shortbread -  helped to raise £280 during the event, which continued throughout the week due to the sheer volume of chocolate and cakes provided!

Orchestrated by Kathryn Rainbird-Clarke, Board Director for Agents Giving, the event is set to launch recognition and achievement for property agents in the Milton Keynes area.

Heavily focused on giving back to the community and fundraising extraordinaire, Kathryn has an extensive portfolio of raising funds for charitable causes alongside running her own consultancy, Hawkmoth Property Consultants.

Working alongside Agents Giving is Rightmove which offers a £100,000 fund which helps support the fundraising activities of all agents and home builders. The grant was set up to offset the costs of setting up an event, providing maximum fundraising to both charities involved.  Managed by Agents Giving, it is a cross industry initiative encompassing letting agents, estate agents, house builders and developers with input from the Home Builders Federation and ARLA/NAEA.

If you would like to attend MK’s community focused event or help in some other way, please www.mkagentsgiving.com for further information.

Manchester Mind: Specialist lender Together got in the swing for charity recently, hosting two golf days to raise essential funds for Manchester Mind.

Brokers from the North met at the Mere Resort in Cheshire, whilst in the South, brokers played the course at The Grove Hotel, Hertfordshire, taking part in a series of golf games and a grand prize draw. 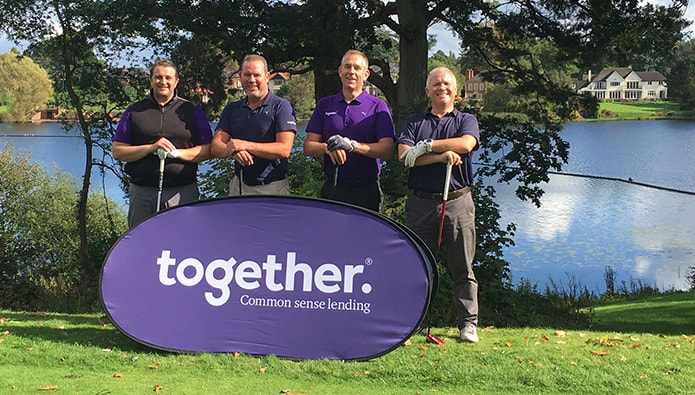 A total of £1800 was raised for Manchester Mind, one of Together’s chosen charities this year, which was nominated by colleagues following a voting process.

Manchester Mind supports 4000 young people and adults in mental distress every year, and takes a positive approach to challenging stereotypes and discrimination.

Matthias Church, Burley: A local church and community centre had its prayers answered when they received a brand new computer, courtesy of agency Manning Stainton.

Church Warden Brian Taylor says: “Being without a computer was a real problem as it made it difficult to manage all the administration tasks associated with the church and the community centre efficiently.”

Over the last 12 months Manning Stainton has donated in excess of £50,000 to over 50 worthwhile organisations through its Community Support Programme. 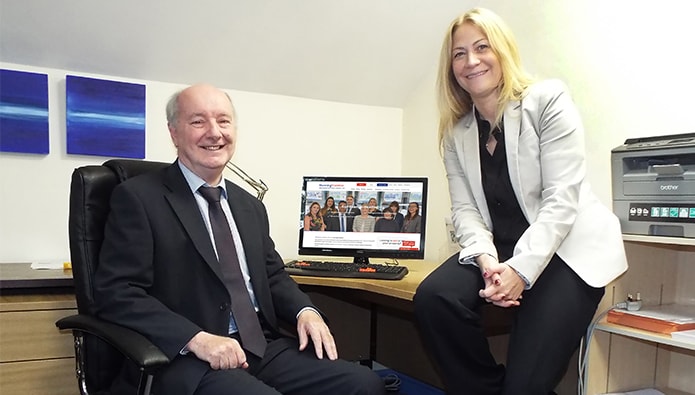 Oh we do love a busy Agents Do Charity page, and...

Agents Do Charity - on foot, on bikes, on the streets ...

Hello and welcome to another Agents Do Charity, EAT’s weekly round-up...