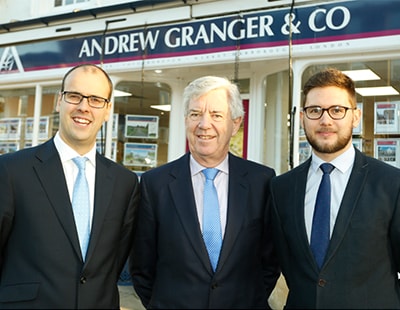 The founder of one of the largest independent agencies in the East Midlands is to step down, over 27 years after setting up the first branch.

Andrew Granger is this month stepping down from Andrew Granger & Co, which he founded in 1989, initially with a small office in Market Harborough. The firm now has over 50 staff in three branches at Harborough, Leicester and Loughborough.

“I’ve always been fascinated by property and always loved working with clients, so in many ways I’ve had the perfect job since I started working in the sector in 1970” says Granger (pictured centre).

The agency has appointed Stephen Mair (right) to the board of directors, to oversee and expand the planning and development department, one of Granger’s previous responsibilities.

“All the staff at the company work hard to maintain Andrew’s high expectations and build on the foundations that he has built this agency on. Everyone here wishes him all the best with his endeavours” says Mark Sandall, joint managing director of the firm.

Meanwhile in Scotland DM Hall, one of country’s largest independent firms of chartered surveyors, has made a number of changes to its management structure following a vote amongst the 23 partners.

West region-based residential surveyor, Eric Curran, remains managing partner while John Albiston, who manages DM Hall’s Inverness office - which he opened 32 years ago - becomes senior partner, replacing Aberdeen’s Keith Jones who has retired from the partnership and is now a consultant to the firm.

Alan Gordon, based in Glasgow, will remain as principal commercial partner for the firm.

These three are joined in DM Hall’s management committee by Irvine’s John McHugh; Alasdair Seaton from Dunfermline; Shaun Peddie, a partner in the Aberdeen office; and Graham Todd, who is a commercial partner. Alan Patrick, the firm’s financial partner, is also an ex officio member of the committee.

Covid leads to agency quitting city centre - is this the industry’s future? ...

A Midlands property firm has quit its city centre premises after...

Hello and welcome to this week’s Property Jobs Today - a...