It’s always a privilege to publicise fund-raising work by our industry, to show the caring nature of a profession that is often caricatured as selfish and venal.

This week’s Agents Do Charity seems particularly touching, with money being raised to support a hospice, the homeless and a very sick young child. From Estate Agent Today, thanks and good wishes to everyone helping so many people.

Please do let us know if we can help raise the profile of your fund-raising. Just drop us an email at press@estateagenttoday.co.uk and we will do the rest.

Cynthia Spicer Hospice: Many congratulations from all at Estate Agent Today to the team at Albion Sales & Lettings in Northampton, who held a successful quiz, laugh and dance evening for their chosen charity.

It involved a pub-style quiz, a comedy set and then at the end “a good old knees-up” (no photographs provided, alas).

Funds were raised through event ticket sales, a charity auction and a raffle - and a magnificent £5,746 was raised for the hospice.

Our thanks to branch manager Sally Knights for letting us know - and well done. 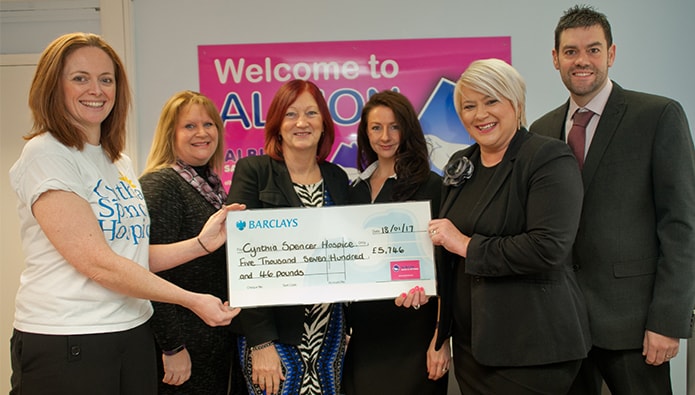 Swindon Night Shelter: Swindon agency Ashcox & Stone has pledged to raise at least £1,000 in 2017 to support the town’s homeless.

By running events and setting challenges, the agency hopes to reach a four-figure target for The Night Shelter in Swindon by the end of this year.

Fiona Cox, sales and lettings manager says: “We raised well over £500 for The Night Shelter at the Old Town Christmas Lights Switch On in December and we really came to understand the good that this charitable project does in our community. So we’ve decided to go a step further and offer further support this year to help people who don’t have a home to call their own.”

The Night Shelter helps people who are homeless, vulnerable and struggling in the area. Volunteers run a night shelter every Friday night  and the guests are offered a hot meal, a chance to shower, wash clothes, a bed for the night and a friendly ear, treating them with respect and dignity.

Well done all, for a wonderful cause.

YMCA Sleep Easy: We’ve been contacted by Claire Forkes, one of the HomeXperts team of agents serving Leamington Spa and Warwick, about a terrific fund-raising attempt in the near future.

Claire is participating in the YMCA Sleep Easy Event in Coventry.  It’s a large organised ‘sleep out’ to raise money and awareness of local homelessness issues.

“I see this as a major concern and as a property professional I feel a responsibility to highlight that property is not just a potential ‘dream home’ or investment opportunity.  For a lot of people, this is a luxury and they rely on charities to simply provide a safe place to sleep at night” she explains.

Here are two links explaining how you can help Claire raise some much-needed funds.

Helping Harry Trust: Harrison Murray’s sales and lettings teams in Northampton, Duston and East Hunsbury are sponsoring a curry tasting and music night to the tune of £500 to help 20-month-old Harry Charlesworth.

The funds give the fund-raising a bumper start to assist little Harry who suffered a number of strokes at birth and has cerebral palsy. He also has a number of other complex conditions meaning he has significant ongoing healthcare needs.

Harry’s supporters want to raise funds to provide life enhancing care and equipment to make life better for Harry and his family.

Harrison Murray’s Northampton office estate agency manager Alan Young, who this week handed the cheque over to Harry and his mum, says: “Harry has touched all of our hearts so it is an absolute pleasure to be able to support in this way.”

Harry’s mum Hayley Charlesworth adds: “Support for Harry from local people and business has been phenomenal and Harrison Murray’s wonderful contribution is the latest example. On behalf of Harry and the rest of the family we thank them from the bottom of our hearts - estate agents often get a bad press but the people of Harrison Murray have stepped up and proved that they are extremely kind and care about the community.”

To find out more about Harry and how to help, visit www.facebook.com/thehelpingharrytrust.

Cancer Research: A Hamptons International employee, Gabrielle Farrow, has been awarded a Corporate Charity Champion of the Year Special Commendation by its charity partner, Cancer Research.

For World Cancer Day, Hamptons International employees raised £14,000 by selling wristbands, with each region putting on its own local event and also collecting at a select few tube stations across London.

The Donation Station – an internal initiative seeing staff donate clothes - started in spring and ran through the rest of the year and saw all staff donate at least one bag of clothing which Cancer Research sold in its shops, resulting in £11,000 being raised.

Agency adopts the spirit of Christmas by helping homeless people ...

Thomas Morris Sales & Lettings didn’t entirely shut down for the...

Countrywide has announced an extensive reorganisation of senior management at its...