Revealed: Why many agencies want new recruits with no industry experience

Many of the leading advocates of the self-employed estate agent business model have talked about...

Furlough changes: Agencies and suppliers must pay some wages

The Chancellor has revealed how he will wean businesses off the Coronavirus Job Retention Scheme...

RICS beefs up Anti-Money Laundering guide in light of Coronavirus

The Royal Institution of Chartered Surveyors has revised its Anti-Money Laundering guidance in the light...

The Financial Conduct Authority has published new draft guidance for lenders which will set out options available...

There’s a celebrity element to this week’s Agents Do Charity, as you can read below.

But whether it’s a big star who is involved, or a quiet piece of heroic fund-raising by your office, we’d love to know and give you a well-earned pat on the back.

Just email us at press@estateagenttoday.co.uk and we’ll do the rest.

Now, where did we leave our sequins...

Marlborough School, Sidcup: Who’d have thought it? Retired Strictly star Len Goodman was on hand at the office of estate agency Robinson Jackson when students from the school – who have severe, complex and physical learning difficulties – popped in just before Christmas.

They were welcomed by the agency’s co-founder Alan Robinson, his family and the partners of Robinson Jackson. To their delight, Strictly Come Dancing’s Head Judge, Len Goodman, was also on hand and promptly raised the cry ‘Seven’ as he gave out presents. 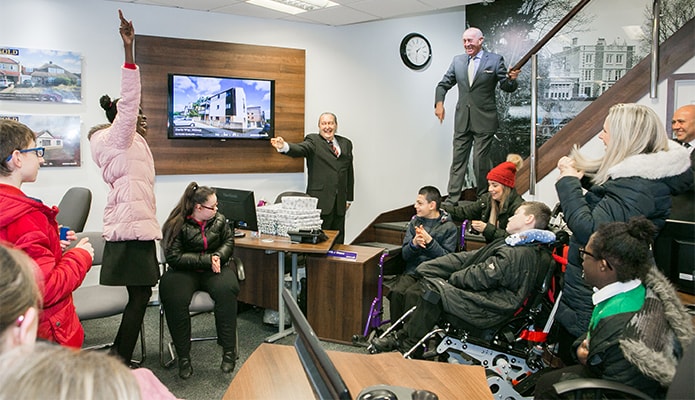 The agency invited the students, their parents/guardians and teachers of Marlborough school to share in this extra special Christmas surprise as a thank you for the valuable work they undertake throughout the year.

The branch visit was also a chance for the school to show off its Sunshine Coach, which was made possible thanks to sponsorship from Alan Robinson and the partners of Robinson Jackson - all in memory of Ron Kennor, their general manager, who lost his battle against cancer in 2015.

The donation was made in tandem with the Variety Club Golf Society Sunshine Coach initiative, which Len Goodman and Alan Robinson are both supporters of. 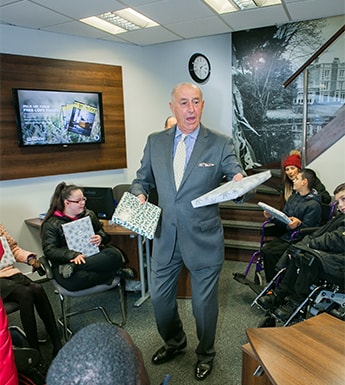 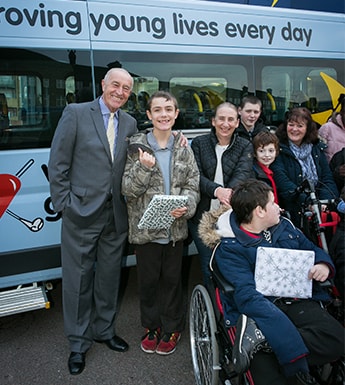 Len commented: “I grew up in the Sidcup area and, in fact, my first job was in a café around the corner when I was just 12, so it’s great to come and support my friend’s brilliant work! It came as no surprise that Alan asked me to help present the coach and meet with the students – it’s typical of them to be helping out and involving themselves in the local community. Seeing the children from Marlborough School today has been fantastic. One of the girls screamed ‘seven’ as I walked down the stairs – always great to hear. The school and Robinson Jackson certainly get a Ten from Len!”

CLIC Sargent: National estate agency network Sequence has raised an amazing £18,605 over the past year for its chosen charity CLIC Sargent, the UK’s leading charity for children and young people with cancer and their families.

Sequence has been supporting CLIC Sargent since 2001 and, after raising more money this year than any other year before, has now raised in excess of £390,000 over the course of the partnership. 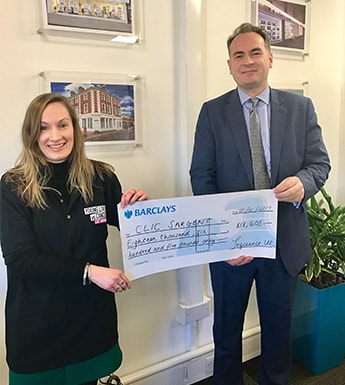 Sequence’s fundraising efforts in 2016 included everything from personal challenges like the London Marathon, skydives and the Prudential Ride London to fun staff initiatives including branch bake sales and dress down days, a MINI bike raffle, a football tournament and the company’s annual Partner’s Ball.

Many branches also got involved in the much-loved Christmas Jumper Day, which this year raised a staggering £1,500 alone.

David Plumtree, Group Estate Agency Chief Executive at Sequence says:  “Our partnership with CLIC Sargent is really valuable to us and we all thoroughly enjoy fundraising year after year for such a worthwhile cause. The work they do in the fight for young lives against cancer is so important and we’re extremely proud to be able to contribute to and be a part of that.  We’re donating such an impressive amount to CLIC Sargent and look forward to an even bigger year of fundraising in 2017.”

The Pattinson Estate Agents Fund: An endowment match challenge at the Community Foundation has helped a family-run estate agency launch a new £150,000 fund to tackle issues of homelessness in the North East.

The Pattinson Estate Agents Fund is held at the advice charity, Community Foundation Tyne & Wear and Northumberland, which matched a donation totalling £100,000 with a further £50,000 through its endowment challenge, called Mr Murray’s Million Pound Match.

Keith Pattinson said: “I founded Pattinson Estate Agents on July 4 1977, and have witnessed the huge changes in the housing market and shifts in technology. Housing has shifted from Edwardian, Victorian and the utopian towers in the sky of the 1970s through to the safe, secure and sustainable homes of today. Sadly, one thing that hasn’t changed is that there still exists members of our community who are homeless, at risk of homelessness and who need our support.

“To celebrate our 40th anniversary of the firm, my daughter and I decided to do something special and establish a Fund at the Community Foundation that will help us give back to the area in which we have grown as a business. The match on our donation has really made a difference, adding a further 50 per cent to grow our endowment. We look forward to making our first round of grants later in the year, and as the endowment grows we’re proud that future generations of our firm can continue our legacy of giving back and helping others.”

Another Friday, another impressive array of agents doing superb work for causes...

Agency stamps its identity on community by buying its Post Office ...

An estate agency is buying a Post Office - and keeping...

Agents Do Charity - and not even a Bank Holiday 'paws' ...