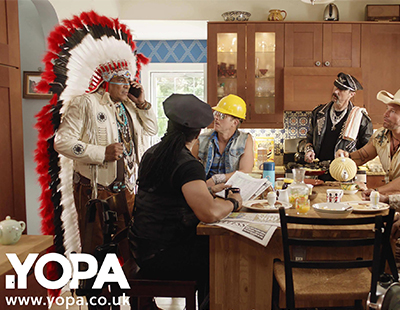 The campaign consists of three 30-second adverts which are themed around 'helping people move'.

The ads depict The Village People, featuring two of its founding members, living together in a cramped home, which they eventually sell through YOPA.

“The concept of The Village People needing a helping hand to move on proved irresistible for these ads," says Daniel Attia, chief executive and co-founder of YOPA.

"Aside from the comedy that the situation presents, it’s a message that fundamentally rings true: so many of us delay moving home because the process is so stressful."

In the first advert, a member of the band decides it is time they relocate and books a valuation with YOPA.

The second ad features one of YOPA's agents measuring up and taking photos, while in the third, the group receive an offer for the full asking price of their property.

At the end of each ad, the connection between Y-M-C-A and Y-O-P-A is made, with a narrator stepping in to inform the band 'it's not Y-O-P-A, it's YOPA'.

“This campaign is a bold new creative direction for YOPA and just what we need to supercharge our growing market share," adds Attia.

"We can’t wait to introduce viewers across the UK to YOPA with these ads, and hope people have as much fun watching them as we did making them.”

The agency will be launching radio, digital and outdoor advertising following the same theme later in the year.

The campaign was developed by creative agency Publicis UK, which recently won the YOPA account after a three-way pitch.

Last week, Savills - which invested in YOPA earlier this year - launched its own TV advertising campaign, focusing on 'peoples’ relationships with their homes at different life stages'.

The first YOPA advert is embedded at the bottom of this article; the others can be viewed here and here.

Yesterday, one of YOPA's competitors, Purplebricks, held its AGM and delivered its trading update for the 19 weeks to September 14.

The agency reported that instructions were up 121% year-on-year and that it took on 3,156 instructions during August.

Purplebricks now employs 300 'Local Property Experts' and says it aims to reach 360 by next April.

It claims its market share of the online space is now 65%.

The statement declared that the company is on course to meet the board's full year expectations and that the UK business could move in to profitability this financial year.

"The way consumers transact residential property is changing and this is being led by the Purplebricks model. Our technology, marketing expertise and strong culture, coupled with our low fixed cost business model makes us best placed to win in this market," commented Michael Bruce, Purplebricks chief executive.

Stock market analyst Anthony Codling again criticised Purplebricks yesterday, saying: "Purplebricks has chosen to major on growth in instructions without telling us how many homes it has actually helped to sell."

"We continue to be surprised that this simple question is left unanswered.”

Earlier this week, the hybrid agency had two complaints against its advertising upheld by the Advertising Standards Authority.

Low fee agents such as Purplebricks and some other online operators...

Can Boomin be the portal to topple Rightmove? An analyst asks… ...

Yes Purplebricks - but how many homes do you actually SELL? ...