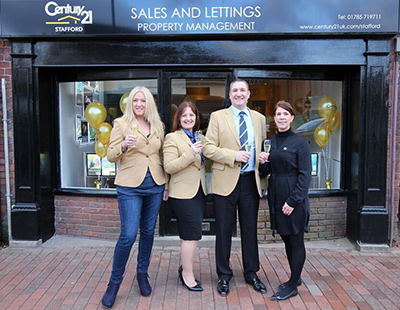 Century 21 has announced another new office, this time in Stafford.

The office - led by local husband and wife team Andrew and Denise Jones - comes only days after Century 21 opened an office in Norwich.

The Century 21 franchise network now runs to 42 in the UK but across the world it claims to have over 6,900 branches with over 100,000 “sales professionals” in 78 countries.

In April 2013 the SDL Group acquired the licence to operate Century 21 in the UK; SDL Group generates over £60m turnover annually with 400 staff across offices in Birmingham, Glasgow, London, Loughborough, Southampton, Stratford-upon-Avon and the group headquarters in Nottingham.

Denise Jones, co-owner of the new Stafford branch, says “the global brand recognition, its professional reputation and support capabilities” encouraged it to become part of the Century 21 brand.