Forget the gloomy stamp duty news, or the prospect that a new house price index might revalue house prices downwards, or the market slowing down because of EU referendum uncertainty.

Need we go on? Instead, let’s look for a moment at the largely-unsung good work done by estate agents day in, day out - not just selling and letting homes, but charitable work.

If you want to publicise your efforts, let us know at press@estateagenttoday.co.uk.

That’s what this week’s heroes did...

Emmaus UK: Review website raterAgent has partnered with this homelessness charity to donate 10p for what it calls “every genuine review” left on the site from April 2 onwards. “We wanted to reflect the kindness shown by sellers, landlords, buyers and tenants in leaving reviews for agents by making a donation to Emmaus on their behalves,” says Mal McCallion, raterAgent’s CEO.

Emmaus helps homeless people by providing not just a bed for the night but a home, meaningful work and a sense of belonging. “We know only too well how important a home is, and it’s great to have raterAgent’s support in our work” says Simon Grainge, the charity’s chief executive.

Housing For Women: Over 50 agents will run the third annual London Estate Agents’ 10k Race to raise funds for Housing for Women. This is a housing association which supports vulnerable women and their children in London, including those experiencing domestic violence, women that have been trafficked, mothers leaving prison and elderly women.

Agents from Stirling Ackroyd, Marsh & Parsons, Winkworth, and Fine & Country, among others, will compete and are encouraging other agencies to sign up and get involved for some friendly rivalry and the chance to win some brilliant prizes. The race, expected to raise over £10,000, takes place on Saturday May 7 in London’s Regents Park starting at 10.30am.

Jakki Moxham, Chief Executive of Housing for Women says: “We’re delighted that so many estate agents have signed up to take part in the London Estate Agents’ 10k race and urge others to take part. Many of the women we support have been living in fear for their safety. Being housed in a safe and secure environment gives them the opportunity to rebuild their lives."

To sign-up to the run please contact Paul Melbourne on paul.melbourne@h4w.co.uk. There is a registration fee of £15 and fundraising target of £150 per person. Here is the JustGiving page for donations: https://www.justgiving.com/housing-for-women.

John Fitzgerald, Managing Director of David Wilson Homes Mercia, handed over a cheque for £27,552 to Elinor Eustace, deputy director of fundraising at the hospital charity.

Throughout 2015 staff at David Wilson Homes held a series of events to raise funds for the hospital, beating their £25,000 target in the process. Their fundraisers included a 50 hour bike-a-thon when the commercial team swapped their office chairs for saddles at the David Lloyd Gym in Solihull. Cycling was also the theme of another fundraiser when a number of employees biked 50 miles through Warwickshire and Worcestershire.

John Fitzgerald, Managing Director for David Wilson Homes Mercia, says: “It was an excellent effort from all the staff and to exceed our target of £25,000 was fantastic as this money will make a difference to the patients at the hospital as well as their families.” 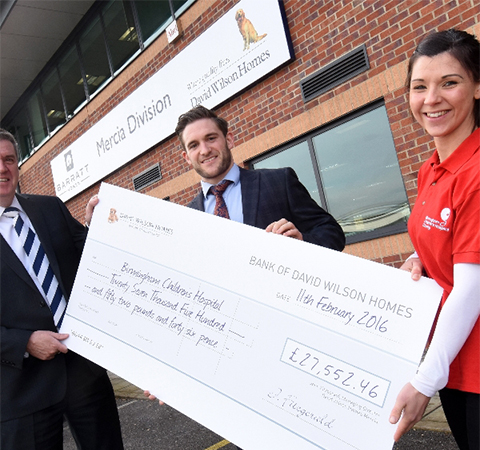 The relationship started in March 2014 and, by January last year partners and staff across the firm's 25 local offices spread across Scotland had gathered in £13,500 for the highly regarded charity. Over the course of 2015, DM Hall trebled that amount.

CHAS provides the only hospice services in Scotland for babies, children and young people with life-shortening conditions. The charity supports more than 370 families and is funded mainly through the generosity of supporters who help to raise more than £9 million each year CHAS needs to provide its vital services.

DM Hall's 250 staff have participated in a huge range of fundraising events to raise money for the charity, including sky dives, bungee jumps, Kiltwalks, cycle races, dress down days and bake sales. 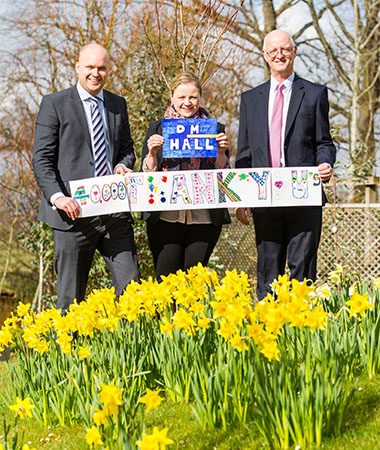 Hello and welcome to the weekend - if it’s Friday, it’s...

Agents Do Charity - even with another storm beating down on us… ...

Another weekend, another storm: it’s hard to put a smile on...

Amazing Agents Do Charity - even at this most difficult of times… ...

Industry…we salute you. We thought we may have no good deeds...