There’s been a bumper mailbag sent to press@estateagenttoday.co.uk this week to mark what must be the height of the fund-raising season now that Christmas is just two weeks away.

There are plenty of heroics to read about below...but we want more! Send us your efforts and we’ll publicise them here.

Now, on with this sackful of good works...

Guiseley Girls Under-13 Footballers: The Guiseley branch of Manning Stainton has kitted out Guiseley Girls under 13’s who play in Division 1 of the West Riding Girls Football League.

Clare Frieze, branch manager, says: ‘Clubs like Guiseley play such an important role in the local community that it is a real pleasure and privilege to be able to help them.”

Manning Stainton has used its Community Support Programme to help other worthwhile causes in the town including the Christmas lights initiative. The company also purchased a new playhouse for Guiseley Primary Pre-School which suffered an arson attack in the summer, destroying toys and equipment valued at £4,500. 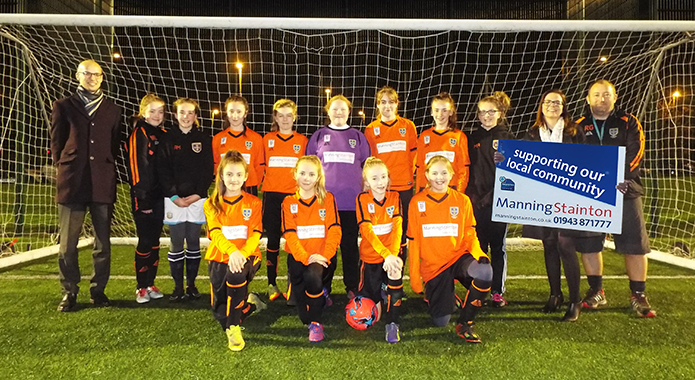 Martin House Children’s Hospice: It was an eye-catching sight that would not have looked out of place in The Italian Job – a fleet of branded Minis snaking their way around the roads of Yorkshire.

The convoy was playing a starring role in a charity delivery with a difference, helping children from across the county with life-limiting illnesses and their families to enjoy a special festive panto together while they spend Christmas in a hospice. 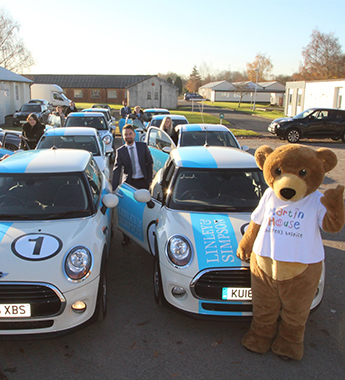 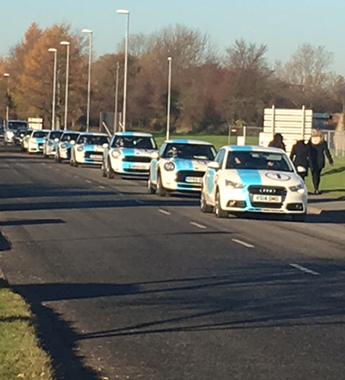 Staff from across every part of Linley & Simpson, the prominent Yorkshire sales and letting agency, have been collecting unwanted goods on behalf of Martin House Children’s Hospice, their adopted charity of the year, throughout November.

Their aim was to turn the clutter into cash - and used “Giving Tuesday” as the day to deliver all the donated items, worth an estimated £1,000, to the charity’s warehouse at Thorp Arch in style. The goods will now be sold off throughout the charity’s Yorkshire shops in the build up to Christmas.

Eight cars, each crammed with bags and boxes of goods, performed an eye-catching drive-past the branch network as they travelled in convoy to pick up the stock en route to the drop-off point. 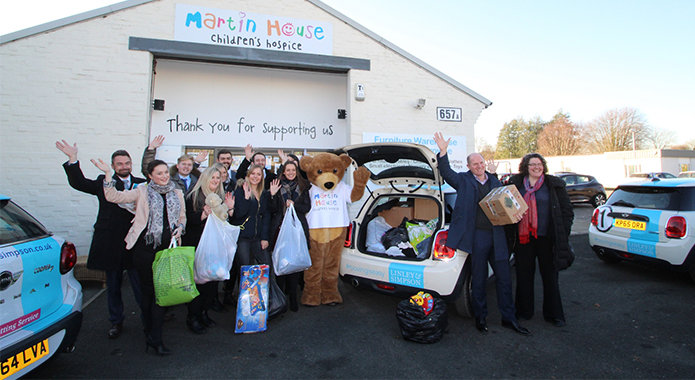 Linley & Simpson has set itself a target of raising £25,000 for Martin House within 12 months and is already off to a flying start with a range of initiatives since it launched in September. These have included:

- A raffle where staff could win a week’s extra holiday, raising £1,000

- An inter-office Great Linley and Simpson Bake Off competition, cooking up £740

- Staff member Becky Lane, from its Horsforth branch, running the Yorkshire Marathon and raising over £700

In addition, the company is donating £1 for every Customer Satisfaction survey that are completed – with £500 pledged so far.

There is no let-up in the final weeks of 2016 with the annual office Christmas jumper competition taking place on December 16; and the donation and decoration of a Christmas tree for the hospice – all thanks to the agency’s partnership with Harrogate-based The Garden Keeper.

Crest Nicholson has supported Variety for many years in order to provide practical, tangible help for sick, disabled or disadvantaged children and their families, across the UK.

Money has been raised for the charity by employees, sub-contractors and suppliers through numerous awards ceremonies, golf days, sporting events and even ‘dress down Fridays’ at Crest Nicholson’s divisional offices, all of which have contributed towards this landmark achievement. Throughout their long-running support of the charity, Crest Nicholson has funded the donation of 27 Variety ‘Sunshine Coaches’ to schools across the South of England.

Mike Haszko, Variety’s Head of Corporate Fundraising, commented “The generous donations they have given us have been crucial in enabling us to help improve the lives of children, and has provided the funding for additional Sunshine coaches, sensory equipment and wheelchairs.”

Honey Pot House Day Nursery: Northwood Solihull is running a 'Giant Advent Calendar' competition during December with the entire window display at the office given over to the competition.

Each day on the countdown to Christmas staff will ‘open’ a date displaying a piece of Honey Pot House Day Nursery artwork. The winner of the competition will be the child’s piece of art with the most Facebook Likes and Shares by 9am on December 28  https://www.facebook.com/northwoodsolihull/ with the prize being four tickets to a local pantomime. 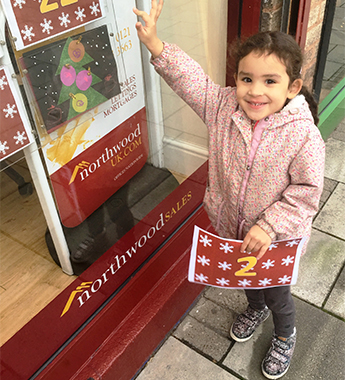 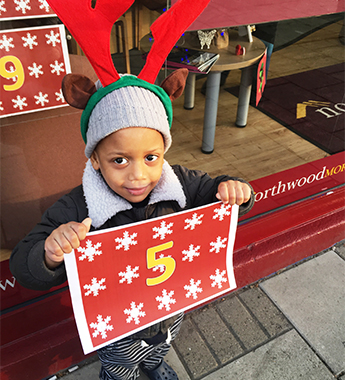 “Here at Northwood we believe in the importance of partnering with local businesses, particularly on initiatives that support promoting our local community. We have recently sponsored the Carousel at Streetsbrook Nursery & Infant School’s Christmas Fayre” says branch manager Amanda Dodd. 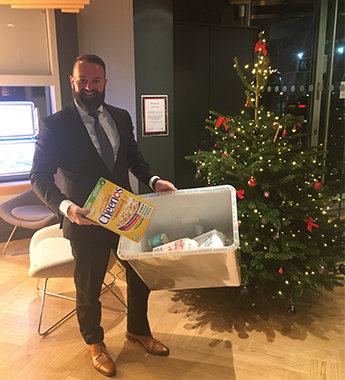 “The idea is to collect non-perishable food and toiletries each day of advent, and then at the end of the month we’ll take the donations to our local food bank to ensure every family can put food on the table at the start of 2017” explains Carla Bradman, head of marketing.

“We started the collection because staff were keen to find a way to give something back this Christmas, but we’re also encouraging local residents to donate a tin or two on their way to or from the station.”

“We know it’s silly, but by wearing your jumper with friends, family or colleagues on Friday 16 December and each donating £2 you’ll be making a serious difference to the lives of children around the world” say the team at the office.

“We are also having a colouring competition for your children to colour in the Christmas Tree and be in with a chance to win one of three prizes. To donate please text TEAMBELVOIR1 to 700500 to give £2.”

The grotto was in pride of place at the recent Oakwood Festive Extravaganza which included a market and seasonal performances from local schools, choirs and Breeze acts. 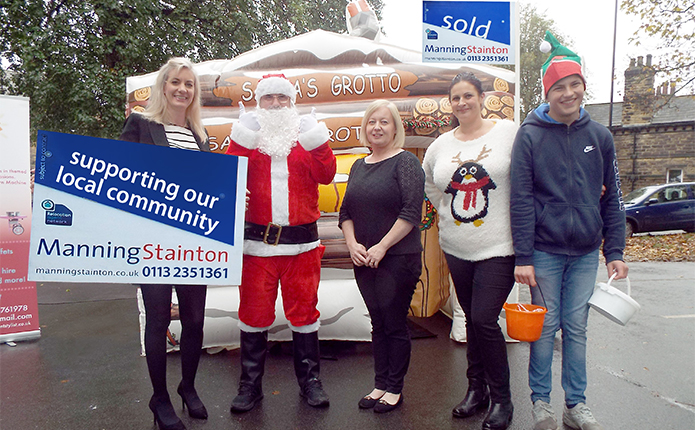 Circus Starr organise shows all over the UK with all profits made being donated to charity. Some 3,500 children’s charities and support organisations benefit from their donated ticket programme.

Circus Starr is a touring circus, made up of a team of world class professional artists from across the world. The charity was established in 1987 and donates free seats for thousands of disadvantaged, disabled and vulnerable children as well as raising funds for local charities.

Andrew Stenning, Managing Director, at Searches UK says: “Searches UK are passionate about making regular contributions and promoting this charitable cause. It is the eighth year running that we have worked with Circus Starr and it is always a pleasure to be involved in bringing some magic to some of the most bravest and admirable children within our community.”

He adds:“We are delighted to yet again be able to provide eight local children and their carers with the opportunity to attend the show. We hope they have an amazing time.”

This year’s show - well, technically it’s next year, of course - will be held on Sunday January 7 at Hove.

Agents Do Charity - as we’re gathering around the tree… ...

Hello and welcome to Agents Do Charity’s final edition before this...

There are just three weeks before Christmas (and a well-deserved break...

One of the many estate agencies hoping to market increasing numbers...