It’s been a difficult week for agents, with a ban on some fees and gloomy market forecasts abounding, so it’s a source of great pride that we can report on the industry’s continuing good work despite the challenging conditions.

If you want to let the industry know about your good work, drop us a line at press@estateagenttoday.co.uk - that’s what these people did.

A further festive initiative is being carried out by Ravensworth, which is donating 10 per cent of all its Christmas card sales to Agents Giving; a generous contribution which will help Agents Giving with its charitable activities in the New Year.

Farnley Football Club: The team has received a donation towards running costs for the 2016/2017 season from Manning Stainton agency. The company has also previously sponsored the team kit.

Ashleigh Naylor, a sales negotiator at Manning Stainton in Wortley, Leeds, says: “Our Community Support Programme is there to help local clubs, groups and other worthwhile organisations, just like Farnley Football Club. We have built up a great relationship with the squad and keep a close eye on their results. They also support our Paint Leeds Green event which raises valuable funds for our chosen charity, Macmillan Cancer Support.” 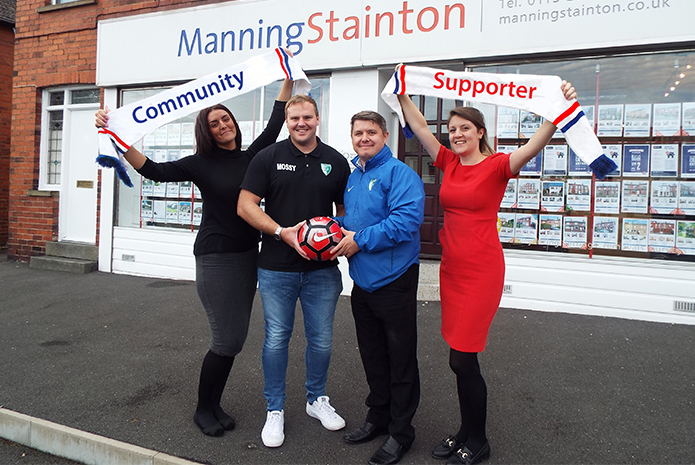 Kingsfield Primary School: The children at this Cambridgeshire school will benefit from their own creativity after Harrison Murray Estate Agency handed over a £400 cheque.

The school landed the money after pupils captured what they understood the property market to mean in the form of colourful ‘For Sale’ signs in a Harrison Murray competition.

Sellers who used Harrison Murray’s Chatteris office were then able to choose one of the designs to display at their property if they so wished - and each time one of the young people’s creations were selected the school was allocated a £25 donation.

Sharon Aylward, Chatteris sales manager, said: “The competition was something a bit unusual but we wanted it to be engaging for the youngsters. We were really delighted with the number of entries we received from Kingsfield, all of which really captured the essence of buying and/or selling a property.”

It comes after the estate agent donated the same amount to Glebelands Primary School.

(Reported in the Cambridgeshire Times).

The event is available to all clients, friends and family, with over 200 guests expected to attend. It will take place on Saturday December 3 at the Los Arqueros Golf Club and all proceeds will go to Caritas Marbella, an organisation dedicated to supporting and making life easier for the most disadvantaged families in the area.

“We’re honoured to be able to plan such an event and to celebrate such a wonderful community cause. Caritas is an extremely worthy charity supporting local residents in the area and we hope many can join us” says a Taylor Wimpey Espana spokesman.

OnTheMarket has signed up one of the country’s biggest house builders,...