One in three property sales in England and Wales fell through before completion in the...

It’s been another very busy week for the excellent fund-raising champions of our industry - and the good causes are encouraging our friends across the Channel too.

Whether you are in the UK or abroad, if you’re involved in agency and doing great charity work we want to know.

Just email us at press@estateagenttoday.co.uk with some details are we’ll do the rest.

Now, stand up and salute these fine figures from our industry...

LOROS, hospice for cancer sufferers in Leicester: A property seminar is to be held as part of the Leicester Business Festival, with proceeds to this charity.

The event, between 6pm and 9pm on Thursday November 3, will be at the Chutney Ivy resaurant in the city.  The ticket price of £15 will include delicious food provided by Chutney Ivy and a drink of your choice.

There will be plenty of opportunity for networking and sharing experiences and all proceeds from the event go to LOROS Hospice - a representative from the charity will be present to explain how the raised funds are used.

UNICEF: A joint team of riders from Leggett Immobilier and Currencies Direct have raised €15,283 for UNICEF by cycling the 861 kilometres between St Emilion and the beautiful French city of Nice.

Eight intrepid riders set off on October 3 for the five day ride, and finished with a police escort down the Promenade des Anglais on the Friday evening. They were also very happy to carry a bottle of wine which had been given by the mayor of St Emilion to present to his counterpart in Nice as a gesture of amitié.

"We set ourselves the goal of raising €10,000 so when we were told that donations had topped the €15,000 barrier we were absolutely thrilled.  We would like to thank BNP Paribas, AXA Insurance, and the hundreds of individual donors who contributed” explains Leggett chief executive officer Graham Downie, was one of the eight riders who completed all five gruelling stages.

“That makes €28,000 that we have raised for childrens charities in the last two years - watch this space for our 2017 fundraising" he adds.

Glass Door co-ordinates shelter and support for homeless people in partnership with churches across West London. The money raised will go towards funding night shelters, hot food and drinks for the homeless as well as provide year-round daytime services including advice, laundry, clothing and washing facilities from its Chelsea base. 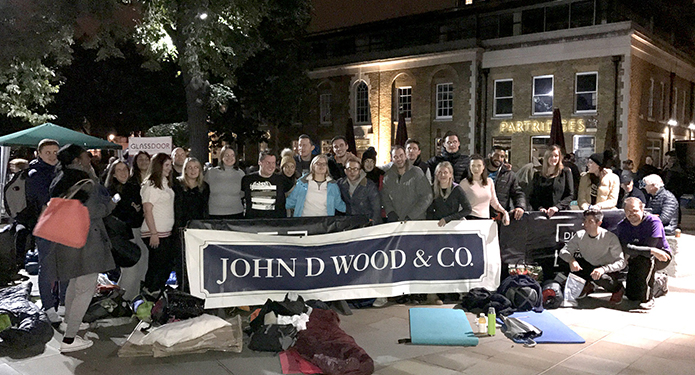 John D Wood & Co will continue to support Glass Door later this year by holding a raffle in aid of the charity at its annual Chelsea Green Carol Service on December 13 at 6.30pm.

Having concluded on 8th September, the Proctors campaign raised a massive £7,630 from 109 instructions.

£70 for 70 days ran from July 1 to September 8 with all branches of Proctors committed to fund-raising. This was backed by coverage in the local papers, eye-catching posters displayed in each branch and an advertising programme. The word was also spread on social media to reach out to potential sellers. 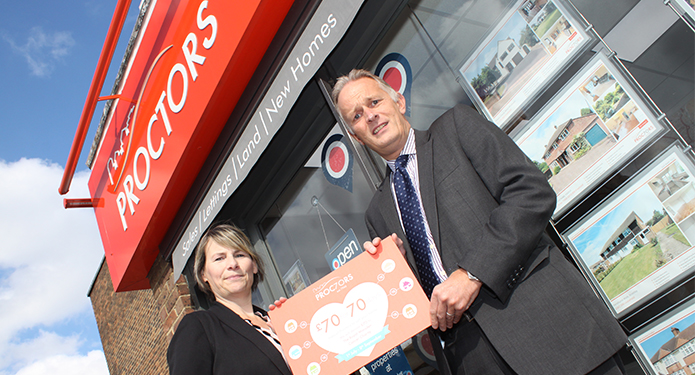 The campaign was inspired by a personal connection. Rodney Jackson, Negotiator at Proctors’ West Wickham branch, has a young daughter who is currently undergoing treatment for a rare abdominal neuroblastoma cancer.

On top of £7,630, Proctors has also been busy raising money through other activities during its anniversary year, increasing the total to £8,240.

To support Proctors during their 70th Anniversary and to give to a worthy cause, visit the Just Giving page: https://www.justgiving.com/fundraising/proctors70

The team, from the firms Nottingham office, beat 22 other teams and came fifth in the corporate challenge of the Robin Hood half marathon, with all of its runners crossing the line in under two hours and 35 minutes.

This is the latest challenge for the firm which hosted the Innes England Team Relay race as part of this year’s Cycle Live event in celebration of its 25th anniversary.

Proctors estate agency in south London is one of many throughout...