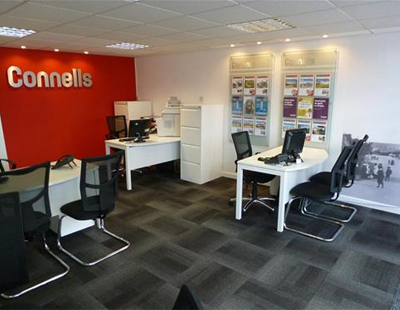 One of the country largest agency chains, Connells, has unveiled an updated logo and boards, along with plans to modernise its offices as part of what it calls “a visual revamp” starting today.

In a press release laced with design-speak, the firm says: “The new logo features a strong, contemporary font and an updated colourway that remains true to the brands [sic] heritage colours.”

It is being used today on Connells’ own website as well as Rightmove and Zoopla, and will also be used on the firm’s social media activities as well as on traditional For Sale and To let boards.

Over time it will appear on the fascias of Connells’ network of nearly 160 high street offices across the country.

During the rest of 2015 the branches will also have new interiors “designed to provide a comfortable work setting for staff and an inviting environment for customers” based on red, white and grey colours.

Each office will also have a feature wall “in Connells’ trademark red with brushed aluminium signage.”

David Plumtree, Connells Group estate agency chief executive, says: “We will be celebrating our 80th anniversary of trading in 2016 and with this fresh new look we will send out a message to the industry that we’re a forward thinking company, constantly evolving and growing in a changing market place.”

PropTech Today: Agents’ Boards - are they protected from technology? ...

Steve, his name was. Steve, the board man. A rather frightening man,...