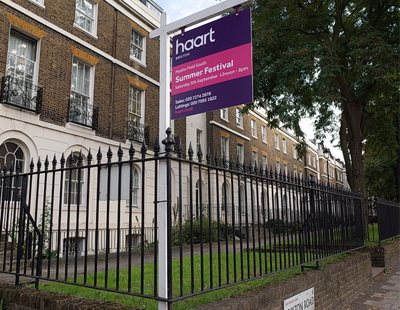 There is controversy in the London suburb of Brixton over an estate agent which has allegedly 'spammed' the area with publicity boards.

The community blog Brixton Buzz carries an extensive array of photographs of Haart signs which, from a distance at least, look like For Sale boards. In fact they are advertising - in late September - a so-called Summer Festival.

The blog is accompanied by text which accuses Haart of trying to outdo Foxtons as the area’s most unpopular estate agents - a reference to the low-scale rioting earlier this year which involved breaking windows in the Brixton branch of Foxtons.

The text on Brixton Buzz reads:

"Haart have taken to plastering their unlawful advertising all over council estates, street signs, parks and other properties that don’t belong to them. Their recent campaign was designed to show off their ‘community’ credentials, with the signs ostensibly being there to promote a local summer festival.

The blog concludes: "So it would appear that it’s all about shameless self advertising, with a local festival being the justification – and with most of the signs remaining in situ long after the event has passed, it’s the PR gift that keeps on giving for the company."

Marsh & Parsons is the latest high-end agency to open in...

Anarchist activists are organising what they call “the decisive battle against...

Pssst! Derek! Now you can get your home marketed for free... ...

Online estate agencies are the centre of attention right now -...

Activists who stormed a wedding as part of a protest event...