It’s Friday so it’s time for us to salute those agents who tirelessly go the extra mile for good causes - unsung heroes of our industry.

Please send in your submissions to press@estateagenttoday.co.uk and we’ll do our best to publish your fine work.

In the meantime, get ready to honour this week’s star performers.

Jackson-Stops & Staff is the sponsor of the Minis section of Teddington Rugby Club, which is aimed at introducing boys and girls from U6 to U12 to the game of rugby in a fun and family-friendly environment.

JS&S  raised over £200 for the Minis team, through various events including face painting, colouring, ‘guess the price of the house,’ a candy floss stall and lucky dip competition. 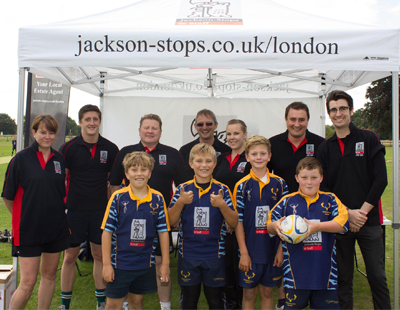 Macmillan Cancer Support: It is 20 years since the very first Belvoir franchise was launched, and the company plans to celebrate with a charity fundraiser that will mark each one of those years.

"We decided that throughout the month of October, we would encourage every office in the Belvoir network to raise or donate a minimum of £20 for the charity of their choice. The figure of £20 is significant because it will represent one pound for every year that Belvoir has been in business and with over 190 offices in the network, this has the potential to raise a considerable sum of money for local and national good causes” says Dorian Gonsalves, Belvoir's Director of Commercial and Franchising.

“We have already heard of exciting plans from across the network - for example, Belvoir Colchester is planning a charity sky dive, Belvoir Liverpool West Derby is running a muddy 10K and many other offices are planning cake bakes, quiz nights and sponsored events.

“The team at Belvoir Northwich held its fifth annual charity golf day, raising £4,300 in aid of Macmillan Cancer Support, bringing the total they have raised for this charity in the past five years to over £15,000” explains Dorian.

Marie Curie Hospice: Accord Mortgages staff have helped maintain a tranquil haven at a Marie Curie hospice in Bradford. A team of six from the building society spent a day weeding and tidying the grounds at the hospice garden in the city.

The project was part of Yorkshire Building Society Group’s volunteering scheme which allows every colleague up to 31 hours’ paid leave to help out at a charity or good cause of their choice.

The Marie Curie hospice operates a 16-bed in patient service as well as a number of different treatments, therapies and support services for day patients.

The Group is aiming to raise £500,000 by December 2016, which equates to funding an hour of care by a Marie Curie Nurse for every hour of the campaign.

If you would like to make a donation to the campaign please visit www.justgiving.com/hourofneed