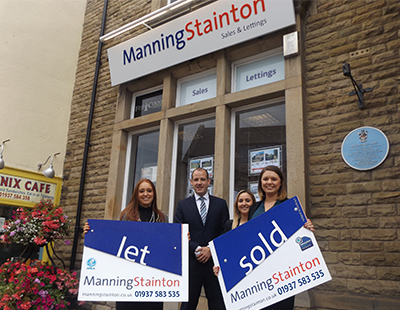 A Yorkshire agency has announced the opening of its 19th branch this week.

Manning Stainton's latest office, which was formerly occupied by Your Move, is located in Wetherby, West Yorkshire.

As well as residential sales and lettings, the Wetherby office will include Fine & Country, which specialises in the marketing of high-end properties.

“Wetherby is an exciting addition to our unrivalled branch network,” says Mark Manning, the firm's sales director.
“It fills a strategic position between our Moortown and Harrogate offices in what is traditionally a very active and buoyant housing market.”

The office, which will be open seven days a week, is being managed by Ben Furnell who was responsible for the successful launch of Manning Stainton's Harrogate branch.

“I am delighted to have been given the opportunity to bring the Manning Stainton brand to Wetherby and hope to make it every bit as successful as the rest of the business. We have assembled a highly experienced team who will breathe new life into the local property marketplace,” says Furnell.

Regional agency Manning Stainton has completed its second acquisition in the...

A new Fine & Country branch is claiming interest in high...