Purplebricks is the first estate agency in the country to launch a meditation service to...

One of the latest 10 agents joining the still-to-launch Boomin portal says it could be...

Speed of conveyancers and lenders will decide short-term market - claim

Savills says the shape and size of the housing market in the coming months will be...

A tax expert says his research suggests some buyers of homes with annexes may have...

A new analysis of searches and leads to agents by Rightmove suggests buyers in London...

It’s mid-summer and distinctly cooler than it should be - but agents’ enthusiasm for helping those in need appears hotter than ever.

If you want to share your good news please let us know on press@estateagenttoday.co.uk.

Buckle up for this week’s fast-revving heroes...

Agency Express Soapbox Challenge for Agents’ Giving: Agency Express threw down the gauntlet challenging friends and peers within the industry to join them in their charity Soapbox race in aid of Agents Giving - and plenty responded.

They had to build and design the ultimate gravity powered Soapbox kart and then, fuelled solely by guts and gravity, the drivers had to race against the clock on a one mile downhill track.

Joining Agency Express on the start line with their hand built karts were teams from Expert Agent, Gilson Bailey, Marchand Petit, CB Slade and Rushbrook & Rathbone.  After several nail biting runs down the mile long track the winners were announced. 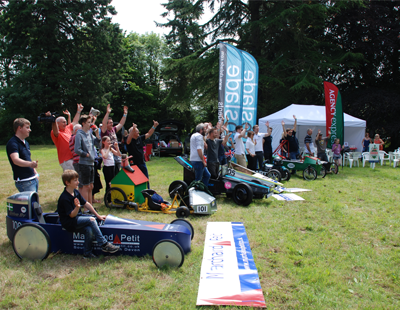 Team Rushbrook and Rathbone took home the ‘Best Dressed Kart’ award for their spectacular build which featured a corex house, one member of the three little pigs, the big bad wolf and a fully functional chimney.  Unfortunately the house was a slow mover. They completed the mile long course in 2:43 and were awarded the ‘Wooden Spoon’. 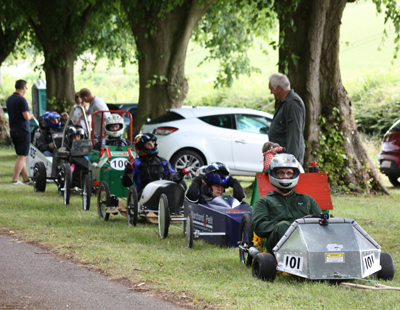 Agency Express sends its thanks to the teams and their fundraising efforts - a gallant £1,700-plus was raised on the day.

Special appreciation also goes to Gilson Bailey and Expert Agent who kindly donated their prize winnings back to Agents Giving which was then doubled by Agency Express.

Jane Webber from Agents Giving commented: “The Agency Express Soapbox Challenge was a brilliant way to bring agents and suppliers together in a bit of healthy competition, put their engineering and driving skills to the test and raise money for great causes. The Agency Express team put on a really fun day for everyone. It’s always great to do something a bit different to get people involved, and the chance to hurtle down a hill in a home-made kart clearly captured the imaginations!”

Agency Express was delighted to confirm that the Soapbox Challenge will be returning in 2016 with all of this year’s teams already on board.

The firm is the official nomination roadshow partner for the annual event which honours deserving young people across Yorkshire and raises thousands of pounds for UK and overseas charities. The roadshow recently visited Manning Stainton’s lettings branch in Moortown where it was welcomed by Helen Oldham, Managing Director of Yorkshire Post Newspapers and Hazel Latner from the Beeston branch of Manning Stainton who is also the current Miss Leeds.

Nominations can also be made online at www.yorkshirechildren.co.uk. The closing date is Wednesday July 29. The roadshow’s final destination is the Wakefield branch of Manning Stainton on July 27, when popular comedy double act and Charity Ambassadors the Chuckle Brothers will officially close the nominations for 2015.

Mark Manning, Sales Director at Manning Stainton says: ‘We are extremely proud to be associated with this wonderful event which is specifically dedicated to recognising the courage and achievements of young people across the county.’

The awards are presented at a glittering ceremony and dinner at New Dock Hall in Leeds on October 16, hosted by BBC Breakfast’s Steph McGovern.

CDS sales and marketing director Matthew Joy says: “We wish The Conveyancing Association, and in particular, intrepid mountaineer, Geraint Aubrey, the very best of luck in his challenge to climb the Matterhorn and to raise over £50,000 for the Ty Hafan Children’s Hospice.  We are delighted to be involved and to support such a wonderful cause.”

Other potential sponsors should contact Lloyd Davies at conveylaw.com.

WaterAid: CEDIA - the Custom Electronic Design & Installation Association - has revealed that its 2015 awards have successfully raised £4,435 for its nominated charity, WaterAid.

More than 400 industry professionals joined CEDIA to celebrate the 10th anniversary of its annual awards at the Natural History Museum, London, earlier this month.

As part of the evening, CEDIA invited guests to support a raffle with all prizes donated by CEDIA member companies. In addition, CEDIA donated £5 from the sale of every ticket to WaterAid, totalling over £2,000.

“We are overwhelmed by the generosity of our industry that resulted in raising the biggest amount ever for our chosen charity to date”, comments Wendy Griffiths, executive director of CEDIA EMEA.

“We thank everyone who donated prizes, bought tickets and helped raise this substantial sum of money for WaterAid. The lack of safe water and sanitation across the world continues to cause mass suffering and we are proud that our donations from the CEDIA Awards will contribute to fighting this global crisis.”