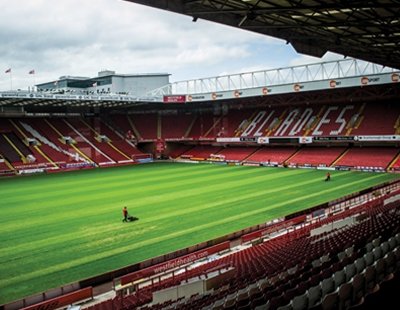 Sheffield United’s new sponsor, local estate agency Redbrik, is to have the club’s main stand named after it - although it currently carries the name of local Olympic sporting hero Jessica Ennis-Hill.

However, the athlete says she “completely understands” the reasons behind the change.

Redbrik has completed a three year deal to sponsor the Bramall Lane stand at the Club's ground and comes in the wake of the recent appointment of new manager Nigel Adkins.

Fast-growing Redbrik has made significant inroads into the Sheffield property market since being launched two years ago by founders Mark Ross and Julie Bulheller.

They launched Redbrik in Glumangate, in the heart of Chesterfield two years ago, opening a second branch at Sheffield and have just recently celebrated the opening of a third branch at Crystal Peaks Shopping Centre.

The rest of the senior team is completed by director Michael Parry, who heads up the Millhouses office, and Peter Lee who oversees the Crystal Peak operation.

"We are delighted to be entering into a partnership with the Blades," said Mark, a lifelong Unitedite. "We operate across the region but our Sheffield offices are very much in the heart of the United fan base so a relationship with the club is an ideal and timely way to further build our profile. In coming weeks we will be announcing an initiative for fans which will help them buy their season ticket in the future."

Jessica Ennis-Hill writes on the club’s website that “it was a real honour to have had the Bramall Lane stand named after me in 2012 in recognition of my Olympic achievements. However, I completely understand the need for Sheffield United to recognise the valuable contributions of its sponsors and want to wish the club and the team all the best for the forthcoming season."

A Sheffield estate agency is pioneering a new form of branch...

Agents Do Charity - never too early in the year to fund-raise… ...

Welcome to 2022 and the first Agents Do Charity of the...