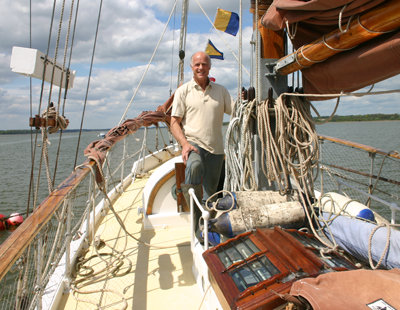 Jackson-Stops & Staff director Tim Dansie is setting sail across the English Channel today in a commemmoration ceremony marking the 75th anniversay of the evacuation.

Danie, along with his wife and two children, will be in his Dunkirk Little Ship, Stenoa - one of 50 Little Ships departing from Ramsgate escorted by the RNLI and the Royal Navy, with a flypast by Spitfire and Hurricane of the Battle of Britain Memorial Flight.

Stenoa, previously named the Cecil and Lilian Philpot, was one of a fleet of 700 private vessels which in 1940 came to the aid of more than 338,000 British and French soldiers trapped on the beaches of Dunkirk during Operation Dynamo.

“Stenoa has taken part every five years since 1965. We are all very much looking forward to it – let’s hope the weather is kind to us” says Dansie.

As a member of The Association of Dunkirk Little Ships, Stenoa has the right to wear the association’s warranted House Flag, the Cross of St George (the flag of the Admiralty) defaced with the Arms of Dunkirk. Little Ships are also entitled to display a plaque marked “Dunkirk 1940”.

Tim Balcon, who lasted just four months in the role of...