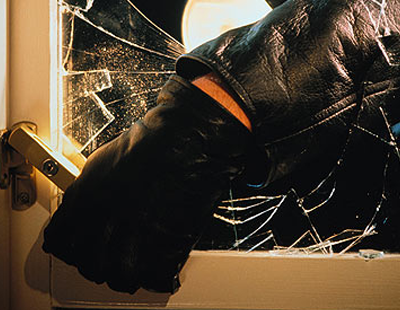 An agent conducting a viewing on a property caught a burglar red-handed, leading to him dropping the TV set he was stealing and then being caught by two nearby builders.

A court heard that a female member of Harwoods Estate Agents in Broseley, Shropshire, saw Andrew McNabb and an accomplice leave the premises through a window, carrying the TV.

“I couldn’t believe it. It was quite surreal to see two young lads coming out of the window. It took me a couple of seconds to adjust to what was happening” the agent - who wished to remain anonymous - told the Shropshire Star newspaper.

The newspaper reports that McNabb, from Newport, then fell off a wall, banged his head and dropped his loot; his accomplice successfully escaped.

McNabb pleaded guilty to one count of burglary of a dwelling when he appeared at Telford Magistrates Court yesterday.

Mr Mike Phillips, prosecuting, is reported by the Shropshire Star to have told the court that the estate agent had turned up at the property on Station Road expecting to meet prospective buyers, but instead found two males climbing out of the window.

A third man was seen shouting at them from the other side of the road.

The defendant was seen climbing out of the window and running along a wall carrying a television, but fell and hit his head on the driveway, momentarily dazing himself.

The court was told McNabb had stolen a television, DVD player and jewellery to the value of £1,375.

Magistrates heard that the 30-year-old had previously been convicted of 36 offences for dishonesty, seven commercial burglaries and one dwelling burglary. He also had six convictions for failing to surrender.

Barbers Estate & Letting Agents in Shropshire doing more than most...

Agency chief retires after 38 years at firm and 26 years in charge ...

The agent working as both managing director and chairman of the...

Agents can now access an online qualification in listings and market...