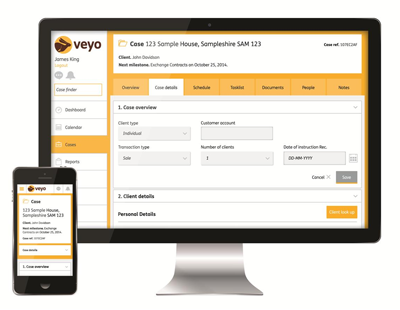 There has been a fierce attack on failed conveyancing portal Veyo, in the form of an open letter from one of the country’s most prominent conveyancing experts.

He describes the reasons given for the collapse of the Veyo project - that it was effectively overtaken by free-to-use conveyancing products and changes in the conveyancing market - as “both incredulous and insulting”.

Hailstone also says some highly-publicised milestones reached by Veyo earlier this year were “misleading” and claims much of the narrative surrounding the portal’s failure in recent weeks has actually been disguising “mismanagement.”

The Law Society's response to the letter is at the bottom of this article, but first here is the Bold Legal Group’s open letter in full.

With the demise of Veyo being announced recently, a significant number of solicitors (and conveyancers) have requested and deserve an explanation, an apology, answers and accountability from those in the higher echelons of the Law Society and Legal Practice Technologies (LPT).

To place the failure of Veyo on the “changing shape of the market” and “free products coming to the market” is both incredulous and insulting. Having spent more than two years talking about and developing Veyo to throw the towel in using such weak excuses, is surely hiding the truth about its mismanagement? I appreciate that Mastek may want to keep things quiet from a commercial viewpoint but the Law Society relies on its members’ contributions and must be held to account by its members and give answers to the questions posed below.

If Free2Convey was thought to be a real threat, then how was it developed within a matter of months and at a fraction of the cost of Veyo? Surely Veyo, allegedly costing millions to develop (or should I say, not develop), would have had a lot more to offer and would still have been able to compete?

There were three positive, somewhat misleading and with hindsight embarrassing public milestones this year:

- In April, it was announced that Veyo had won four branding awards.

- On the 26th May it was announced that, “Veyo the comprehensive conveyancing portal will today commence its roll out across England and Wales.”

- In August, a new chair and finance director were appointed by LPT.

Up until only a month or so before Veyo’s demise, Jonathan Smithers, the Law Society President was still implying publicly that Veyo would dominate its competitors. That is despite the continual stories being leaked that Veyo’s days were numbered. This situation led some to believe that Mr Smithers either had no idea what was going on behind the scenes at LPT or preferred to put a positive spin on a rapidly declining situation.

Some of the questions that have been raised by a number of Bold Legal Group members and some non-members are:

Why was the project ever commenced? Please produce evidence that Veyo was wanted and needed by the market and by Law Society members.

Exactly when was the project launched and why did it take so long to gather any momentum?

Who were the driving forces behind it?

What was their position and financial involvement?

Exactly how much money has been spent/lost from the very start of the project to the present day?

Exactly how much money is still owed and to whom?

Who will have the integrity to shoulder the blame for Veyo’s failure, and consider resigning?

Will a thorough investigation into Veyo’s failure be carried out? Will the results be published?

It is understood that a number of Case Management Suppliers (and others) offered to work with the Law Society and LPT some time ago but were rebuffed. Surely working with people and businesses with experience and systems already in place would have been a more sensible commercial decision? Was that ever considered in the initial decision making stage and if so why was it rejected?

Was it commercially sensible to choose an IT partner with no experience of solicitors or the domestic property market, effectively seeking to reinvent the wheel?

How many firms signed up/registered an interest? Did any of them pay any money to LPT?

It was put to me that Veyo was ready to go live in May. Admittedly, it might not have been 100% ready but these things rarely are. Was there too much interference by some parties that resulted in paralysis by analysis and effectively killed Veyo at that time? Who were those parties?

Please provide the detail behind how it was planned that the investment monies would be recouped and a profit made, including the timescale.

What is left of Veyo, is it useable, does it have any value?

Why did the Law Society President and Chief Executive (past and present) allow the project to limp along for so long at a huge cost, when the writing was clearly on the wall?

When will the policing of CQS and its re-accreditation process improve, or will CQS go the same way as Veyo?

The only slightly positive comment I have personally received (and I have received many comments about this issue) was: “As regards Veyo, it was a good idea and a noble effort but badly managed. I would like the Law Society to get some credit for trying.” That is one, only partially positive comment, out of hundreds if not thousands made recently, sometimes privately and sometimes publicly.

I am sure that many solicitors and conveyancers sincerely hope that the right thing will be done and that the above questions will be answered, honestly, swiftly and comprehensively.

Closing the Veyo project was a difficult decision made by the Law Society and Mastek after an independent review of the market, which has changed significantly, and the cost and time needed to get a product to market.

We are sorry for the disappointment caused to conveyancers who were waiting for Veyo to be launched. We will learn lessons from this project and will ensure that changes are made and that  the same mistakes are not repeated. Those who were responsible for running LPT which was an independent company from the Law Society, are no longer involved with the Law Society.